Tardis
Register
Don't have an account?
Sign In
Advertisement
in: The History Collection novels, 1985 novels, First Doctor novelisations, Stories set in the distant past

Long, long ago on the great plains of Asia Minor, two mighty armies faced each other in mortal combat. The armies were the Greeks and the Trojans and the prize they were fighting for was Helen, the most beautiful woman in the world.

To the Greeks it seemed that the city of Troy was impregnable and only a miracle could bring them success.

And then help comes to them in a most unexpected way as a strange blue box materialises close to their camp, bringing with it the First Doctor, Steven and Vicki, who soon find themselves caught up in the irreversible tide of history and legend...

This Target book was released as an audiobook on 7 April 2008 complete and unabridged by BBC Audio and read by Stephen Thorne. 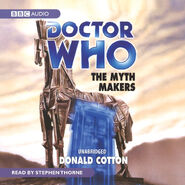