The Mutation of Time (novelisation)

The Mutation of Time

The Mutation of Time was a novelisation based on episodes 7-12 of the 1965 television serial The Daleks' Master Plan.

The Daleks' Masterplan is well under way. With the Time Destroyer, the most deadly machine ever devised, they will conquer the Universe. Only one person stands in their way - the Doctor. For he has stolen the precious Taranium core which is vital to activate the machine.

Travelling through Time and Space, the Doctor and his companions are forever on the move in case the Daleks track them down.

But after several months, to their horror, the TARDIS indicates that they are being followed...

This Target Book was released as an audiobook on 3 June 2010 complete and unabridged by BBC Audio and read by Peter Purves and Jean Marsh, with Dalek voices by Nicholas Briggs. 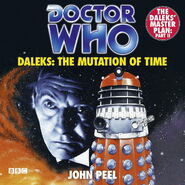