The Monsters Inside was the second novel in the BBC New Series Adventures series. It was written by Stephen Cole and featured the Ninth Doctor and Rose Tyler.

The TARDIS takes the Ninth Doctor and Rose Tyler to a destination in deep space – Justicia, a prison camp stretched over seven planets, where Earth colonies deal with their criminals.

While Rose finds herself locked up in a teenage borstal, the Doctor is trapped in a scientific labour camp. Each is determined to find the other, and soon both Rose and the Doctor are risking life and limb to escape in their distinctive styles.

But their dangerous plans are complicated by some old enemies. Are these creatures fellow prisoners as they claim, or staging a takeover for their own sinister purposes? 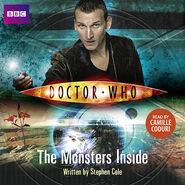 Retrieved from "https://tardis.fandom.com/wiki/The_Monsters_Inside_(novel)?oldid=2730432"
Community content is available under CC-BY-SA unless otherwise noted.