To escape a catastrophic volcanic eruption the Doctor takes the TARDIS out of space and time - and into a void he can only describe as 'nowhere'.

But the crisis is far from over and when the time-machine's circuits overload, the TARDIS explodes.

The Doctor, Jamie and Zoe come to in a dark unearthly forest. There they encounter a host of characters who seem somehow familiar: a beautiful princess with long flaxen hair, a sea traveler dressed in eighteenth-century clothes, and a white rabbit frantically consulting his pocket watch...

What is happening to the three time-travellers? What strange power guides their actions? In the Land of Fiction who can really tell?

'BUT WE CAN'T BE NOWHERE - THAT'S IMPOSSIBLE.'

Zoe, the Doctor's astrophysicist companion, can't understand how the TARDIS can be beyond both time and space; but the Doctor's time-travelling craft has taken him, Zoe and Jamie to a place where fiction is reality.

Beguiled and threatened on all sides by characters from myth and literature, the Doctor must discover who or what controls the all-too-lifelike apparitions.

The Mind Robber, with Patrick Troughton as the Doctor, was first broadcast in 1968. This novelisation is by Peter Ling, who wrote the scripts of four of the five television episodes.

Doctor Who - The Mind Robber is available as a BBC video, and will be broadcast on BSB television during 1990.

This Target Book was released as an audiobook on 6 August 2009 complete and unabridged by BBC Audio and read by Derek Jacobi. 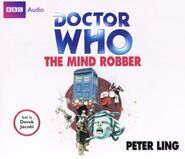