The Message of Mystery

The Dalek Book
The Message of Mystery (comic story) was a fumetti comic strip in The Dalek Book. Using photographs taken from The Daleks, it told a brand new story with Susan Foreman as the main character.

The story also had a puzzle element to it. The story tells the tale of how Susan helped the Daleks decode a message, but it ends with her not having actually revealed that message to her captors. The reader is then given the tools Susan is purported to have used — the so-called "Dalekode" — to untangle the mystery themselves. Despite the reader interaction, the answer is certainly a part of the story and the correct answer to the puzzle is an integral part of the narrative

Centuries before their attempted conquest of the Solar System, (DAN: Invasion of the Daleks) Daleks on the peaceful Skaro receive a message they cannot decode. Nervous, they jump to a war footing almost immediately. Meanwhile, Susan Foreman borrows her grandfather's TARDIS for a short trip to Venus. Instead, she lands on Skaro. She is quickly captured by the Daleks, who believe she might be responsible for the mysterious message. She momentarily escapes, but soon they overwhelm her again. They force her to try to decode the message by threatening not to feed her unless she helps.

Susan stands up for herself and gets the Daleks to back down a bit. They will feed her first, then she will decode the message. They concede the point, and their admiration grows for the young girl. As she talks to them some more, one Dalek in particular grows fond of the young space-time traveller. He doesn't want her to decode the message, because that will mean she has to leave Skaro.

But Susan isn't sticking around. She takes a look at the message and uses what she calls "Dalekode" to solve the puzzle. She begins to laugh in delight. But the Daleks respond violently to the laughter. They've never heard such a sound before. Some of them are so afraid that they topple over. Susan doesn't understand what's going on, but she does know a lucky break when she sees one. She heads off towards the TARDIS immediately.

Just as she nears her grandfather's borrowed ship, she notices that one Dalek is blocking her progress. It's the one who'd grown so fond of her in the Dalek City. He begs her not to go. But she leaves anyway, never telling the Daleks what the message says.

In the aftermath of her departure, the Daleks remain on a war footing, until a Dalek was able to use the notes Susan had left behind to decode the message. Far from being a threat, the message is, "Peace and good will to all". The Daleks stand down.

Retrieved from "https://tardis.fandom.com/wiki/The_Message_of_Mystery_(comic_story)?oldid=905788"
Community content is available under CC-BY-SA unless otherwise noted.
... more about "The Message of Mystery (comic story)"
RDF feed
Has image
File: 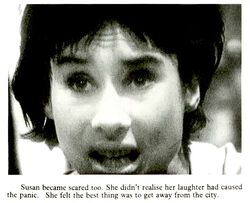