The Massacre was a novelisation based on the 1966 television serial The Massacre.

The TARDIS lands in Paris on 19 August 1572. Driven by scientific curiosity, the Doctor leaves Steven to meet and exchange views with the apothecary, Charles Preslin.

Before he disappears, he warns Steven to stay out of 'mischief, religion and politics.' But in sixteenth-century Paris it is impossible to remain a mere observer, and Steven soon finds himself involved with a group of Huguenots.

The Protestant minority of France is being threatened by the Catholic hierarchy, and danger stalks the Paris streets. As Steven tries to find his way back to the TARDIS he discovers that one of the main persecutors of the Huguenots appears to be - the Doctor.

ON THE THRONE SAT THE DEADLY ABBOT OF AMBOISE. STEVEN STARED AT HIM IN HORROR. 'THAT'S - THE DOCTOR!'

The TARDIS lands in Paris on 19 August 1572 and the Doctor, driven by scientific curiosity, leaves Steven in order to meet and exchange views with the apothecary Charles Preslin.

Ignoring the Doctor's warning to stay out of trouble, Steven finds himself caught up with a group of Huguenots, whose very existence is threatened by the Catholic hierarchy. As Steven tries to find his way back to the TARDIS, he is horrified to find the greatest persecutor of the Huguenots is actually none other then the Doctor himself...

First broadcast in 1966, this story is the only one to feature William Hartnell playing a character other then the Doctor himself. It also introduced the character of Dodo Chaplet, who was to accompany the Doctor on his next five adventures.

This Target Book was released as an audiobook on 11 June 2015 complete and unabridged by BBC Audio and read by Peter Purves. 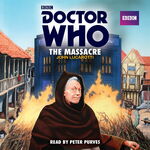