An Earth colony, the future

In the far future a group of humans is living an idyllic existence on a distant planet. Their colony is run like a gigantic holiday camp and nothing seems to trouble their carefree existence.

When one of them claims that the colony is being invaded by hideous monsters, no one takes him seriously. But the Doctor's suspicions are immediately aroused.

What is the terrible menace that lurks at the heart of this apparent paradise? Why are the colonists unaware of the danger that lies before their very eyes? And what is the Macra Terror?

This Target Book was released as an audiobook on 4 August 2016 complete and unabridged by BBC Physical Audio and read by Anneke Wills. 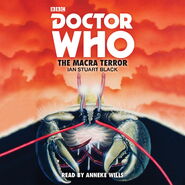