You may be looking for televised Doctor Who stories that were made, transmitted, and subsequently lost by the BBC.

The Lost Stories was a range of Doctor Who audios released by Big Finish Productions starting in 2009.

It took scripts or story treatments that had been officially proposed to the BBC from 1963 to 1990, converted them into audio-appropriate scripts and recorded them with as many of the original cast members as possible.

The line was wholly separate from their monthly Doctor Who and The Companion Chronicles ranges. During the production of this series, the Doctors and companions involved continued to be as active as they normally were in other ranges.

The series originally ended in 2013, as Big Finish had effectively mined every existing unmade story of the classic era within a reasonable stage of development, and in order to focus on The Early Adventures, which told new stories using a similar format to that used for the First, Second and Third Doctor ranges here. The series was revived in 2019.

Each CD release features a reversible cover, the reverse evoking the format of the covers to the Target novelisations of the 1970s.

The idea of creating a series completing lost adventures had not been one unconsidered by Big Finish from the start — however, it was largely believed that a series based on unoriginal material would not sell. The release and success of the Stage Play series, which adapted plays like The Ultimate Adventure into audio stories, put these thoughts at odds, as it soon became clear that fans were very eager to see these legendary lost tales brought to life.

Big Finish expanded the ambition of the range soon after announcing it. As the range developed, it changed from being about "the season 23 that never was" to more generally producing a whole range of never-made television stories. Big Finish released stories for every classic Doctor except for the Eighth Doctor, whose unmade stories represent early drafts of the TV Movie and the concept of a reboot series. Stories involving the Fourth, Fifth, Sixth and Seventh Doctors were full cast audios, while stories from the First, Second, and Third Doctors' eras had a format more akin to the "enhanced audiobooks" of the Companion Chronicles range, although featuring a greater number of voice actors and instead told from a third person viewpoint.

The key factor for the producers was that the stories in this range must have at some point been officially proposed to the BBC. In some instances, the scripts produced by Big Finish were essentially those that had been delivered to the BBC; in others, they were wholly written for Big Finish based upon story ideas that had been proposed to the script editor of the era. In a few cases, finished scripts like The Song of Megaptera (originally titled The Song of the Space Whale) were tweaked for the audio medium. In others, as with Leviathan, they were more substantially altered.

At the beginning of the second series, Big Finish released two boxsets, one for each of these Doctors. The First Doctor Box Set contained Farewell, Great Macedon and The Fragile Yellow Arc of Fragrance, both featuring narration from Carole Ann Ford and William Russell. These stories were presented as halfway between a Companion Chronicle and a full-cast audio in order to capture as closely as possible the sense of the original story without some of the original actors. The Second Doctor Box Set contained only one story from that Doctor: Prison in Space, and the intended pilot for the Dalek spin-off series The Destroyers. Prison in Space featured both Wendy Padbury and Frazer Hines as Zoe Heriot and Jamie McCrimmon, respectively, while The Destroyers featured Jean Marsh as Sara Kingdom. Another story for each of these Doctors was released in Series 3: The Masters of Luxor for the First Doctor and The Rosemariners for the Second Doctor, both of which featured the same regulars as the box sets. The Fourth series focused on these early Doctors, with the First Doctor getting his final release in The Dark Planet, which was also Maureen O'Brien's first audio story alongside William Russell. The Second Doctor received two stories: The Queen of Time and Lords of the Red Planet.

These Doctors featured the least in the range, but nevertheless got at least one story each. The Third Doctor only appeared once in the final story of the original run of stories, The Mega, featuring Katy Manning as Jo Grant and Richard Franklin as Mike Yates.

The Fourth Doctor got one box set released during a break in the third series (despite not being part of it), which contained the stories The Foe from the Future and The Valley of Death, both of which featured Tom Baker as the Fourth Doctor and Louise Jameson as Leela. Two more Fourth Doctor stories, Return of the Cybermen and The Doomsday Contract, were released in the sixth series. Return marked the debuts of Sadie Miller and Christopher Naylor as Sarah Jane Smith and Harry Sullivan and The Doomsday Contract featured Lalla Ward as Romana and John Leeson as K9.

The Fifth Doctor got a trilogy of stories in the third series featuring Peter Davison as the Fifth Doctor, Sarah Sutton as Nyssa and Janet Fielding as Tegan Jovanka. These would be the only stories produced by Big Finish to feature just Nyssa and Tegan as companions, until The Waters of Amsterdam in January 2016. Another Fifth Doctor story Nightmare Country was released in the fifth series, featuring Janet Fielding as Tegan and Mark Strickson as Turlough.

As the original impetus for the range, the Sixth Doctor stories deserve special consideration. Originally, the idea was that all known season 23 scripts and story ideas would be produced. Due to rights issues and writer availability, this proved impossible. Additionally, Big Finish research into "the season that never was" revealed scripts and story ideas actually meant for season 22. The producer of the range decided to take a more liberal approach to the concept. He put together a "new" season, comprised of most of the stories known to have been destined for season 23 and some stories meant for season 22. He knit all the stories together with continuing narrative elements not present in the original television scripts and story treatments. The result was an enhancement of the original goal of simply adapting the known stories for audio. The very fact that there were eight stories in the first run of Sixth Doctor stories immediately suggests a different season length than would have been possible on television during the Colin Baker era (however, it was common for the BBC to commission more stories for a season than would necessarily be broadcast, in case one fell through, so the number of Season 23 stories in existence is not a reliable indicator of how long the season might have been; plus, at the time Season 23 was being planned there was every likelihood that Baker would have stayed on into Season 24 or beyond, so any leftover stories could have been used for later seasons).

The first two stories, The Nightmare Fair and Mission to Magnus, had previously been released as Target novels in 1989, under The Missing Episodes banner. The third story in the Target range, The Ultimate Evil, was not adapted as the writer, Wally K Daly, asked for too high a fee and was also working on an adaptation of the story for the RNIB at the time. The Ultimate Evil was later adapted in the fifth series.

As produced, the Sixth Doctor stories do possess a different tone from the standard Big Finish Doctor Who range. They employed a style of electronic music evocative of the one that would likely have been used had the stories been produced for television in 1985. Moreover, the characterisations of Peri and the Sixth Doctor are closer to the season 22 versions of the characters than typical for the main Big Finish Doctor Who range.

In the third series of Lost Stories Big Finish released three more Sixth Doctor stories, two intended for Season 22 and one for 23, which featured the return of Victoria Waterfield (Power Play), the Traken Union and the Melkur (The Guardians of Prophecy) and the Sontarans (The First Sontarans).

Another story from the Season 27, Night Thoughts, had been released in 2006 in the Main Range. This story incorporated Hex, who had not appeared in the original script. 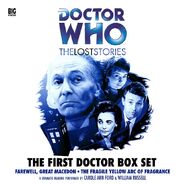 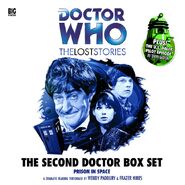 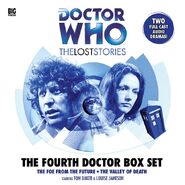