Tardis
Register
Don't have an account?
Sign In
Advertisement
in: 1980 television stories, Season 18 stories, Stories set in 2290,
and 6 more
English

Doctor Who and the Leisure Hive

You may be looking for the titular resort.

The title sequence was redone with a 'star-field' motif. Delia Derbyshire's arrangement of the Doctor Who theme was abandoned in favour of a more dynamic, glossy and 'funky' version of it, done by Peter Howell (also of the BBC Radiophonic Workshop, where Derbyshire worked previously), using synthesisers (particularily the Yamaha CS-80 and ARP Odyssey synthesisers, as well as an EMS vocoder). These wholesale alterations to the programme's opening sequence would, with relatively minor adjustments, remain in place until season 24. At the same time, Nathan-Turner decided to end composer Dudley Simpson's long association with the programme. He chose the Radiophonic Workshop to handle the incidental music for The Leisure Hive.

The story also brought a new uniform look for the Fourth Doctor. His coat and trademark scarf were now coloured burgundy, the latter with purple stripes. The new question mark motif premiered here on the Doctor's shirt collar and would persist throughout Nathan-Turner's era.

Narratively, The Leisure Hive was an unusual story in that it was commissioned directly by the producer rather than the script editor, because Christopher H. Bidmead was not yet hired. New executive producer Barry Letts, who had previously served as the show's producer during most of the Jon Pertwee era and during Tom Baker's first story, also had a significant hand in shaping the story's outline.[1] Letts's new role as executive producer would only last for the duration of the season, and would be his last contribution to televised Doctor Who.

The Fourth Doctor and Romana II arrive on Argolis in search of a peaceful holiday at the famed Leisure Hive. Instead they become embroiled in both a takeover scheme by the Argolins' historic enemy the Foamasi and the machinations of Pangol, child of the Generator.

The Fourth Doctor, having yet again failed to pilot the TARDIS to Brighton Pavilion thanks to his attempts to bypass the randomiser, snores loudly on a deck chair as Romana and K9 discuss alternate holiday options. Frustrated, Romana tosses her beach ball into the sea and K9 goes to fetch it, badly damaging him.

Romana convinces the Doctor to go to Argolis, home of the famed Leisure Hive. Argolis had been nearly annihilated by a brief but devastating war with the Foamasi, but the surviving Argolins have built the domed holiday palace, offering anti-gravity racquetball among other delights.

However, the Hive has run into financial dire straits. The chief executive, Morix, ageing and near death, is pondering a buy-out offer from Earth businessmen Brock and Klout, who represent the Foamasi, but his hotheaded son Pangol will hear nothing of it. Morix dies and is succeeded by Mena, who herself is getting old. Meanwhile, an alien presence has infiltrated the Hive.

The Doctor and Romana arrive and watch a demonstration of the Hive's newest offering, the Tachyon Recreation Generator, but the demonstration goes horribly awry when a volunteer from the crowd is torn apart inside the machine.

The Doctor and Romana realise the recordings of the experiments have been faked. The Doctor explores the Tachyon Recreation Generator, and when an alien turns the machine on, the Doctor appears to be torn limb from limb.

The image onscreen is merely an illusion - the Doctor escaped the generator from the back. He and Romana are taken to Mena by security guards. Meanwhile, staff scientist Hardin has arrived, and when Mena learns of the newcomers' experience with time technology, she asks Romana to assist him with tachyonics experiments. They are trying to use the questionable science to reverse the flow of time. The Argolin race is sterile after the war with the Foamasi. Rejuvenating themselves is the only way to survive.

Mena begins to age quickly, a result of the radioactivity on the planet. Meanwhile, Hardin and his partner, Stimson, discuss their experiments, which have been faked by them. Hardin wants to confess. Stimson plans to get off Argolis. Romana and Hardin appear to have some success, but when they go to tell Mena, the equipment explodes.

Guards find Stimson, who has been murdered, and arrest the Doctor. He stands trial in the boardroom and claims his innocence. Romana and Hardin announce their success, but before it can be used on Mena, Pangol wants to test it on the Doctor. As the experiment proceeds, Romana realises something is wrong, but she is too late to stop the experiment. The Doctor emerges from the machine, aged several hundred years.

The Doctor and Romana are imprisoned and try to figure out what went wrong with the experiment. Pangol discovers that Hardin's experiments were faked, which Hardin admits to but says he is near to a breakthrough, and wants Romana's help. Mena refuses.

Vargos fits the Doctor and Romana with limitation collars. They can roam freely around the Leisure Hive, but must stay within the limits programmed into the collars. If they enter a forbidden area or attempt to remove the collars, these will tighten around their necks and strangle them.

Pangol prevents Mena from signing contracts with the Foamasi. He wants to rebuild Argolis. He is the first Argolin created in the recreation generator and has big plans for the machine.

The alien, a Foamasi, helps Romana escape. The Foamasi doesn't speak with words but the Doctor can understand him. They go to the boardroom where Pangol reveals his grand plans to Brock - he will raise an Argolin army from the generator. The Foamasi approaches Brock and pulls at his face - revealing that it is a mask and he is a Foamasi.

The first Foamasi takes Brock's voice synthesiser and reveals that Brock and Klout (the murderer) are disguised Foamasi, members of a dissident group called the West Lodge. They do not act in the interest of the Foamasi at large, however. The two planets are now at peace. Pangol is suspicious of the Doctor and the Foamasi, and refuses to let them leave. When the Foamasi ship takes off, it is destroyed by Pangol.

Pangol plans to start creating his clone army. The Doctor and Romana try to stop him by using the randomiser from the TARDIS. Pangol enters the machine, wearing the Helmet of Theron, and duplicates himself into an army. However, because the Doctor was in the machine at the time, the clones are images of the Doctor, who has been restored to his original age. The clones do not last long, disappearing one by one.

Hardin takes a near-dead Mena to the machine to regenerate her, but Pangol pushes past him. Both Mena and Pangol get into the machine, and both are restored, Mena to a young adult age and Pangol to a baby. The Doctor shuts off the generator.

The Foamasi who rescued Romana appears, not having been in the Foamasi ship when it was destroyed. He and Mena begin negotiations for peace. The Doctor and Romana decide to leave, and the Doctor decides to leave the randomiser behind despite the threat of the Black Guardian, as he is tired of not knowing where he's going. With that, the two return to the TARDIS to continue their travels.

In March 2002, At the BBC Radiophonic Workshop Volume 3 was released with The Leisure Hive score in it. 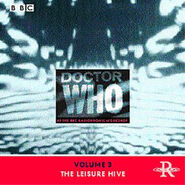 This story was released as Doctor Who: The Leisure Hive.

Released as Doctor Who: The Leisure Hive.