The Land of the Dead (audio story)

You may be looking for the story as it exists within the DWU.

The Land of the Dead was the fourth story in Big Finish's monthly range. It was written by Stephen Cole and featured Peter Davison as the Fifth Doctor and Sarah Sutton as Nyssa.

It's 1964, briefly at least, and the Fifth Doctor has just recently left Tegan Jovanka at Heathrow Airport in the wake of Adric's untimely death. Travelling alone with Nyssa, he materialises the TARDIS in the icy north of Alaska. The TARDIS seems to have a mind of its own, locking in on an odd energy source and disappearing back into the time vortex; it rematerialises in the same location, but thirty years in the future, in 1994. Here it does land, and the Doctor and Nyssa find themselves chased by a dangerous creature across the tundra to an unusual house and an odd group of individuals. 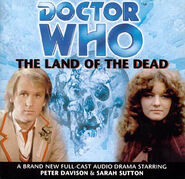 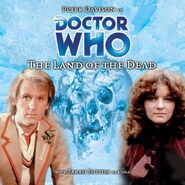