The Krotons was a novelisation based on the 1968 television serial The Krotons.

Many thousands of years ago strange crystalline creatures came down from the stars and settled on the planet of the Gonds.

Over the years they educated the Gonds through teaching machines in the great Hall of Learning. In return, the Gonds periodically selected their two most brilliant scholars to become the 'companions' of these mysterious beings.

But when the Doctor, Jamie and Zoe arrive on the planet, they soon discover the true evil purpose of the aliens and learn what it really means to be companions of the Krotons...

According to legend, many thousands of years ago strange creatures came from the skies and settled on the planet of the Gonds. They were the Krotons.

And now, every year, the Gond's two greatest scholars are chosen to become the companions of the Krotons. They disappear and are never seen again, but it is held to be a great honour; for only the finest are chosen.

But when the Doctor, Jamie and Zoe arrive on the planet, they discover the true, evil purpose of the aliens and find out what it really means to be the companions of the Krotons...

Doctor Who - The Krotons, featuring Patrick Troughton in the role of the Doctor, was broadcast in 1968 and was written by Robert Holmes. This novelization is by Terrance Dicks, who has novelized over sixty Doctor Who television stories; at the time The Krotons was broadcast he was the script editor of the series.

Doctor Who - The Krotons is available as a BBC video.

This Target Book was released as an audiobook on 2 April 2020 complete and unabridged by BBC Audio and read by Frazer Hines. 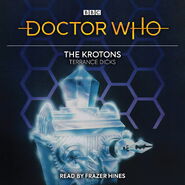