It is 4 March, 1215, and the TARDIS materialises in England during a jousting match held in the presence of King John.

But it soon becomes apparent to the Doctor that something is very seriously wrong. Why does John express no fear or surprise at the time-travellers' sudden appearance, and indeed welcomes them as the King's Demons?

And what is the true identity of Sir Giles, the King's Champion?

Very soon the Doctor finds himself involved in a fiendish plot to alter the course of world history by one of his oldest and deadliest enemies.

This Target Book was released as an audiobook on 5 May 2016 complete and unabridged by BBC Physical Audio and read by Mark Strickson. 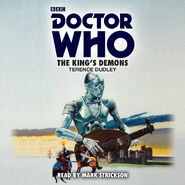