The Invasion was a novelisation based on the 1968 television serial The Invasion.

Materialising in outer space, the TARDIS is attacked by a missile fired from the dark side of the moon.

Back on Earth, the newly-formed United Nations Intelligence Taskforce, led by Brigadier Lethbridge-Stewart, is disturbed by a series of UFO sightings over Southern England.

Meanwhile, a large consignment of mysterious crates is delivered to the headquarters of International Electromatix, the largest computer and electronics firm in the world.

Three seemingly unconnected events - but in reality the preparations for a massive Cyberman invasion of Earth with one aim - the total annihilation of the human race.

'THE DOCTOR WILL BE ELIMINATED. THE INVASION MUST PROCEED.'

Bringing Jamie and Zoe to Earth, the Doctor meets up with Brigadier Lethbridge-Stewart, now in charge of the newly formed UNIT. He is investigating International Electromatix, an electronics firm where the machines seem to have taken control. Many people have entered International Electromatix, fewer have returned, and they have all been - changed. The Doctor soon realises that his old enemies the Cybermen are involved. Will he find their hidden army in time to stop the invasion?

The first story to feature UNIT, The Invasion was written for television by Derrick Sherwin. This novelization is by the late Ian Marter who played the Doctor's companion Harry Sullivan from 1974-75.

This Target Book was released as an audiobook on 7 April 2016 complete and unabridged by BBC Physical Audio and read by David Troughton with Cyberman voices by Nicholas Briggs. 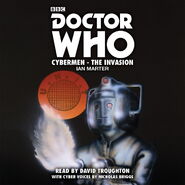