The I was a short-lived audio series published by BBV Productions and produced by Bill Baggs, part of the Audio Adventures in Time & Space. As the name suggested, it focused on the I, the alien species introduced by Jonathan Blum and Kate Orman in their Eighth Doctor novel Seeing I. It only ever produced one finished, released story, I Scream, written by Lance Parkin. However, a second, longer story, The I Job, was scripted by Lum and Orman themselves. Originally intended to also be released at BBV, it was, however, rejected by the company due to its length.[1]

However, this was not the end of the project: live performances of the script were done at the Gallifrey One and Conflux conventions in 2002,[2] and a decade later, Jon Blum revised the script, with it subsequently entered production by Mezzacotta Productions (led by David Morgan-Mar and the Comic Irregulars) in association with 2RRR Radio in Sydney. Actors were cast, and it was recorded in 2RRR Studios over two days in January 2013. Jonathan Blum commission Alex Ries for artwork of the I.[3]

However, despite post-production help from Alistair Lock, Neil Marsh, and several others, the need for re-recording and difficulties with actor availability necessitated the release's delay until early 2014; during this process, it was split into five twenty-minute episodes to allow for better recaps and cliffhangers. These delays were ultimately exacerbated by Jon Blum's own business and 2RRR's change in management.[4] As of 2022[update], the project has not been released, although during the post-production stage, performances of The I Job episode one were held at three Australian conventions in 2013: Conflux, Whovention, and Lords of Time.[2] Jon Blum and his wife Kate Orman presented a nearly-final mix of The I Job episode one at the Chicago TARDIS convention in December 2013, where they also gave a sneak-peek at a "motion comic" version of the story.[5] 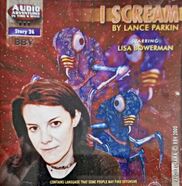