It was the second of Big Finish's "Side Steps", exploring other elements of the Doctor Who universe. This story was also Robert Shearman's first contribution to audio-based Doctor Who.

The Doctor's companion Frobisher, a shapeshifting mesomorph in the shape of a penguin, decides to use the TARDIS' dimensional stabilisers to create a gumblejack fish. This weakens the TARDIS' interior dimensions and prompts an emergency landing in a medieval castle.

As the TARDIS materializes, Pepin VI - newly crowned as his people's emperor and God - finds he lacks the stomach to rule and disavows his divinity. Eugene Tacitus notes all events down, albeit glamorizing them, in a 'Bible'. The people of the kingdom interpret the arrival of the TARDIS as a sign from Heaven and disregard his claims of not being divine. Pepin is left in his office with the Doctor and Frobisher, whom are dubbed his 'angels'.

To learn more about the society, the Doctor visits the scribe Eugene Tacitus. He notices mysterious things in all the bibles of past 'Gods', notably that they are all in Eugene's handwriting (despite the kings having lived long lives) and that each book is exactly as long as it needs to be to fit all of the King's life in.

Soon after, the Doctor and Eugene find a secret chamber beneath the castle, where Childeric, Pepin's illegitimate half brother, keeps his five-year-old son hidden from all human contact. Childric hopes to usurp the throne by preserving his son's purity and evolving him into the people's all-powerful messiah. However when the boy is released, he demonstrates horrifying reality warping powers and an insatiable desire to kill.

Eugene grows unhinged, claiming he has seen the boy before, and flees with the Doctor. The boy mentally scans Childric, learning that he is not his father and telekinetically tears him apart. Using it's abilities, the child teleports around the castle searching for it's real father and individually kills each inhabitant of the castle until only the Doctor, Frobisher, and Eugene are left. Eugene swears the child has repeatedly murdered the castle's residents for centuries, but the Doctor, noticing the child's mannerisms, identifies Eugene as the boy's father.

The Doctor realizes that the castle, and everyone in it, is part of a fictional reality created by Eugene as a means of self-torturing escapism. It is revealed that in real life, Eugene murdered his sleeping son. He then constructed the castle reality and seeded it with stereotypical characters to escape his inner guilt. However, a sub-routine in the reality's make-up continually called forward the child to slaughter the other characters. Every time the cycle repeated, Eugene would kill the child - reliving his crime. This would restore all the characters to life and the fiction would start anew.

The Doctor convinces Eugene that the cycle of violence must be broken and resists the urge to kill the child, placing the handle of his knife in the child's hands. As the Doctor and Frobisher protest, the child skewers Eugene through the heart. As Eugene dies, the castle's reality fades into a featureless void, leaving only the Doctor, Frobisher, and the TARDIS behind.

Saddened by the deaths they've witnessed, the Doctor reminds Frobisher that the gumblejack fish he used the TARDIS to create at the start of the story is similar to all the characters they witnessed die. They board the healed TARDIS and depart. 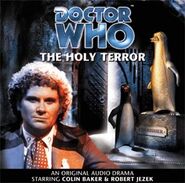 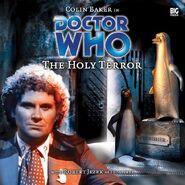 Retrieved from "https://tardis.fandom.com/wiki/The_Holy_Terror_(audio_story)?oldid=2984204"
Community content is available under CC-BY-SA unless otherwise noted.