History books don't always tell the whole story. Certainly there is no record of an episode that occurred when the Scots, led by Bonnie Prince Charlie, were defeated by the English at the Battle of Culloden in 1746...

And the presence at the time of a blue police box on the Scottish moors seems to have escaped the notice of most eye-witnesses....

THE HIGHLANDERS sets the record straight. And while the incidents described may not be of great interest to historians, for Jamie McCrimmon they mark the beginning of a series of extraordinary adventures.

This Target Book was released as an audiobook on 6 September 2012 complete and unabridged by BBC Audio and read by Anneke Wills. 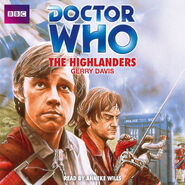