I would also like to take this opportunity to squash the persistent rumours about mysterious "disappearances" and emphasise that rural and urban areas are now enjoying a life of harmony and peace. I'm sure you're glad to hear this. And I'm happy you're glad.

Helen A, ruler of colony Terra Alpha, is determined that happiness will prevail. And if any killjoys insist on being miserable, the fun guns of the Happiness Patrol will remove them; or they will vanish into the Kandy Kitchen, where the Kandy Man will deal with them.

When the Doctor and Ace spend a night in the dark streets of Terra Alpha they have to keep a smile on their faces - or else! - while making contact with the native Pipe People and trying to convince the colonists that they can have too much of a good thing - even sweets and happiness.

Note: this is how the chapter titles are listed in the table of contents. In the actual chapter headings, the titles are simple ordinal numbers (1-15).

This Target Book was released as an audiobook on 2 July 2009 complete and unabridged by BBC Audio and read by Rula Lenska. 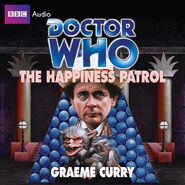