Back in the gun-totin', hard-hittin', fast-shootin' days of the Old Wild West, when outlaws ruled the land and the good guys stayed off the streets, a troupe of travelling players - Miss Dodo Dupont, Steven Regret and the mysterious Doctor Caligari - moseyed into the town of Tombstone one October afternoon.

Their method of transportation was a mite peculiar though. After all, a police box materialising out of thin air sure ain't the usual way to enter a sedate town like Tombstone...

And when the Doctor and his pardners meet up with Wyatt Earp and the notorious Clanton brothers, they soon find out that the scene is all set for high noon at the O.K. Corral...

This Target Book was released as an audiobook on 7 February 2013 complete and unabridged by BBC Audio and read by Shane Rimmer. 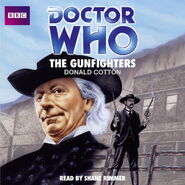