The Planet of Witches by Alan Barnes

Whilst attempting a detailed scan of E-Space, K9 detects the trail of a large spacecraft. Seeking a lead for their escape, the Doctor sets out on its trail towards a misty yellow planet.

Arriving just in time to witness a crash-landing in the planet's swamps, the Doctor and his crew discover a number of escaping prisoners fleeing from someone claiming to be a Witchfinder... whilst terrifying 'familiars' float around them.

For this is the planet of the witches... and the witches may just know the way home.

The Quest of the Engineer by Andrew Smith

The TARDIS crew's attempts to escape E-Space lead them to a strange planet with a surface that shifts and changes constantly.

Losing their ship down a fissure, they venture into the depths of this world and encounter the man who rules this place – a man known only as 'the Engineer'. He tells them that he's on a quest for illumination, and to find a rumoured portal in space that may lead to another reality, with knowledge unknown in this universe.

It seems he may be on the same quest as the Doctor and his friends. But can he be trusted? And who is he really? 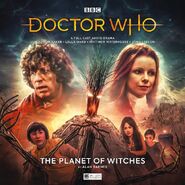 The Planet of Witches 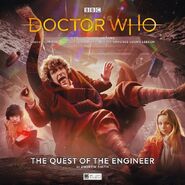 Retrieved from "https://tardis.fandom.com/wiki/The_Fourth_Doctor_Adventures_Series_9:_Volume_2?oldid=2921262"
Community content is available under CC-BY-SA unless otherwise noted.