Still searching for a way out of E-Space, the TARDIS crew land on an isolated space rock... and immediately find it drawn towards a nearby asteroid.

The asteroid has air and gravity unequal to its size and is strewn with the wrecks of spaceships. Veins and pools of rust are everywhere.

Stuck on the asteroid away from his friends, Adric discovers that it's a penal colony housing a gang of alien convicts - but resources are low, and they're starting to starve.

But escaping the prisoners is only the first part of the traveller's troubles. Because there's a sinister presence at the heart of the asteroid... and it won't release them quite as easily.

Chase the Night by Jonathan Morris

The TARDIS lands in an alien tropical rainforest at night where the Doctor, Adric and Romana discover a set of rails stretching through the undergrowth. These tracks carry a long-crashed spaceship that's been converted to run along them like a train.

The ship has to keep moving because only the night-side of the world is habitable. The sun on the day-side burns so hot that everything on the surface is turned to ash.

But the stress and strain of the constant movement is beginning to take its toll on the ship. Parts are starting to break down, and the relentless heat gets ever closer - but the greatest danger may be on the inside... 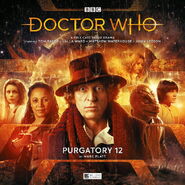 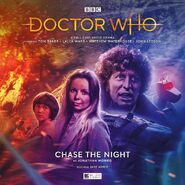 Retrieved from "https://tardis.fandom.com/wiki/The_Fourth_Doctor_Adventures_Series_9:_Volume_1?oldid=2921261"
Community content is available under CC-BY-SA unless otherwise noted.