A twentieth anniversary special featuring the Doctor in all five of his regenerations.

Why are all five Doctors being removed from their separate time-streams? Who is the enemy they will have to unite against? What will become of the Doctors when the battle is over?

We have travelled a long way with Doctor Who. The Five Doctors gives us a chance to turn the clock back and meet some old friends — and some old enemies.

THE PLAYER PUT THE LITTLE FIGURE OF THE FIRST DOCTOR ON THE BOARD, PUSHING IT WOWARDS THE CENTRE WITH A LONG RAKE. THE FIRST PIECE WAS ON THE BOARD.

But this is not a game. One by one, the five Doctors are removed from their respective time-streams and dumped in the Death Zone on Gallifrey.

But who is manipulating them in this way? And why has the Master been sent to help them?

And what exactly is inside Rassilon's tomb?

The Five Doctors was originally broadcast on 25th November 1983 to mark the twentieth anniversary of the series. It was written by Terrance Dicks who was script editor of the series for five years and who has written more than sixty novelizations of Doctor Who television stories.

This Target Book was released as an audiobook on 2 November 2017 complete and unabridged by BBC Audio and read by Jon Culshaw with Dalek and Cyberman voices by Nicholas Briggs. 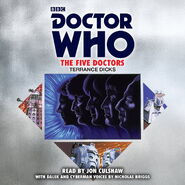