You may be looking for The First Doctor: Volume Two.

2.1 The Invention of Death by John Dorney

After an experimental flight, the TARDIS crew find themselves on one of the strangest worlds they have ever encountered.

Alien life takes many forms, and on Ashtallah the travellers find all their preconceptions tested.

But this world is about to make a discovery – and it could mean the end of everything.

2.2 The Barbarians and the Samurai by Andrew Smith

In 19th century Japan, Westerners are forbidden. So when the TARDIS arrives near Lord Mamoru's castle, the daimyo's Samurai are soon on their trail.

Uncovering secrets at court and treachery in the ranks, the Doctor and his friends are drawn into intrigue. And, as a battle begins, they are caught in the middle. 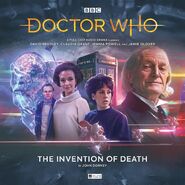 The Invention of Death 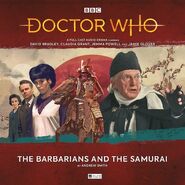 The Barbarians and the Samurai

Retrieved from "https://tardis.fandom.com/wiki/The_First_Doctor_Adventures:_Volume_Two?oldid=2702915"
Community content is available under CC-BY-SA unless otherwise noted.