Tardis
Register
Don't have an account?
Sign In
Advertisement
in: Tenth Doctor NSA novels, 2008 novels, Stories set in 292009,
and 2 more

The Eyeless was the thirtieth novel in the BBC New Series Adventures series. It was written by Lance Parkin and featured the Tenth Doctor.

At the heart of the ruined city of Arcopolis is the Fortress. It's a brutal structure placed here by one of the sides in a devastating intergalactic war that's long ended. Fifteen years ago, the entire population of the planet was killed in an instant by the weapon housed deep in the heart of the Fortress. Now only the ghosts remain.

The Doctor arrives, and determines to fight his way past the Fortress's automatic defences and put the weapon beyond use. But he soon discovers he's not the only person in Arcopolis. What is the true nature of the weapon? Is the planet really haunted? Who are the Eyeless? And what will happen if they get to the weapon before the Doctor?

The Doctor has a fight on his hands. And this time he's all on his own.

The Doctor lands, alone, on an uninhabited, green skied planet in Galaxy Seven, almost exactly 290,000 lightyears from Earth, around the year 292009, near Arcopolis, to disable a weapon that wiped out the population fifteen years ago in 291994. He wanders through the city, looking at the futuristic technology. A six fingered ghost hand touches the TARDIS.

The Doctor encounters a group of children scavenging the city. They seem to think the Doctor is a ghost and try to attack him. While trying to convince them that he is no ghost, the Doctor wishes he could see one. A ghost appears and kills one of the children, making the other ones flee.

The Doctor wakes up in a settlement consisting of a group of adults who survived the weapon, and a lot of children. The adults want the Doctor to stay, so he can help them with scientific progress and agriculture, but the Doctor refuses their demands. During his stay in the village, the Doctor befriends a woman named Dela. Recently her daughter Jall was found dead, and her eyes were missing from the body.

The Doctor goes to the Fortress again and spots a transparent, six-fingered figure. The figure flees. While the Doctor manages to reach the Fortress, Alsa, Gar, a few other children and two adults followed him. Alsa enters the Fortress with the Doctor. Outside the Fortress transparent creatures approach the remaining people and introduce themselves as the Eyeless. One of them has two eyes embedded inside its body, Jall's eyes.

The Fortress' defenses are deactivated and the Doctor and Alsa escape. He gives the weapon to Alsa, and gives her the choice to destroy it. Alsa is unsure about the future and the Doctor takes her to the TARDIS. They travel to Arcopolis in 292029. There an adult version of Gar tells them how they destroyed the weapon and Alsa is assured enough. Alsa is returned to her own time and the Doctor leaves. 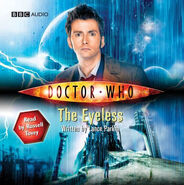