The Eye of the Jungle

1x CD
The Eye of the Jungle is an exclusive-to-audio from AudioGo featuring the Eleventh Doctor. It is read by David Troughton.

The Amazon rainforest, 1827. The Doctor, Amy and Rory arrive in the jungle near a hurriedly abandoned campsite, where they are surrounded by hungry black caiman - huge lizards. Only the arrival of a man with a rifle sees off the giant beasts. Oliver Blazington has come to the forest to bag big game, and his companion Garrett is a naturalist, collecting exotic creatures for London Zoo. But the Doctor soon discovers that another very different hunter is stalking the Amazon. Animals and people have been disappearing without trace, and local villagers speak darkly of 'The Eye of the Jungle'. Amy senses that the all-seeing Eye is watching them - but she and Rory are powerless to intervene when it sets its sights on the Doctor...

The Doctor, Amy and Rory arrives in the Amazonian forest in 1827, and are quickly attacked by a group of caimans. They are saved by a group of hunter lead by a man called Oliver Blazington who take them back to is camp. They meet the leader of the expedition, Edwin Garrot, a naturalist whose goal is to bring back animals for the opening of the London Zoo in 1828. The Tardis crew rapidly learn about disappearances in the village, for which they blame a spirit called the eye of the jungle. The Doctor, Amy and Rory decides to stay for the night. Scanning the area with the sonic, the Doctor looks at the sky and sees a strange light. Suddenly, a scream. The hunter has been taken with a jaguar and the priest of the village. Deciding that the place is not safe the Doctor takes Amy and Rory back to the TARDIS, a travel that takes them the rest of the night. Back to the landing place, they find out that the TARDIS has gone. And they are attacked by a huge jaguar. The Doctor distract it to let Amy and Rory escape. The Jaguar attacks the Doctor, but a red beam strikes it and it disappears. An oval, corroded robot probe arrives, and as the Doctor tries to scan it he is struck by the same beam.
Hearing the scene while escaping, the Williams' go back to the landing area, only to find the sonic screwdriver lying on the floor.
Back to the Doctor, he has actually been teleported into a dark place. The Doctor discovers that he is in a space station, just over south America. Then three rodent like creatures appears, but they seem altered and deformed. They explain to the Doctor that they have a war to win.
Following a noise Rory finds the probe and understand that it is the eye of the jungle. Amy and Rory are attacked by a snake, and the probe shoots its beam at the snake, then at Rory. Amy starts to understand that the beam may not be lethal, and with a faith worthy of the one the Doctor shows in Curse of the black spot she grabs the Sonic screwdriver and present it to the probe, in order to be beamed as well.
On the space station, the Doctor learns the the creatures, who are called Nadurni, want to use the animals they take as biological weapons manipulating their genes to win a war. The Doctor understands that they already did it on themselves to much, hence the deformations.
Amy arrives on the station near the TARDIS and Rory, and several other things and animals. In closed cells, they find deformed creatures who turns out to be the experiments made by the Nadurni. In one, they see Blazington, mixed with a jaguar. He asks them to help him get out, and Amy accepts but doing so she also frees all the other creatures. Blazington helps them to get to the Doctor.
The Doctor is held captive by the aliens who want to mix him with a caiman and a tarantula in order to created the perfect soldier, because of the incredible cells of the Doctor. But quickly enough Amy, Rory and Blazington arrives. Blazington saves the Doctor from the gene manipulator but get stuck in it. The result is a big creature part human, jaguar, caiman and tarantula. He starts to chase the three Nadurni, smashes everything on his way and advising the Doctor and his friends to flee before he'll start to hunt them. The Doctor grabs Amy and Rory, and they use one of the probes to get back to the Tardis avoiding the chaos induced by the release of all the creatures. The Doctor plans on helping the creatures. After a fight with Cthuluesque monsters, the Doctor manage to connects cables and to put a power shock with the screwdriver in order to make the probes splicing the creatures' genes back together before teleporting them back home.
This done, the Tardis crew returns to the village in the ship, just before the explosion of the station, leaving dead Blazington and the three aliens. Back to the village, every missing person is back, and Garrot is ready to go back to England with the animals in their cages, and new jaguars. Furthermore, he states that animals are not all for the zoo, most of them being for private collections. The Doctor uses is screwdriver to open all the cages, giving back their freedom to all animals, leaving Garrot ruined.
Back in the TARDIS, the Doctor states that "I was at the opening of the London Zoo next year, as far as I remember there were no jaguar on display."

Retrieved from "https://tardis.fandom.com/wiki/The_Eye_of_the_Jungle_(audio_story)?oldid=644359"
Community content is available under CC-BY-SA unless otherwise noted.
... more about "The Eye of the Jungle (audio story)"
RDF feed
Has image
File: 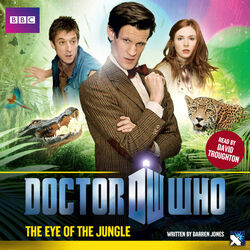