The Edge of Destruction (novelisation)

The Edge of Destruction

The Edge of Destruction

In a final bid to regain control of the TARDIS' faulty control system the Doctor is driven to experiment with a dangerous untried combination.

With a violent explosion, the TARDIS blacks out and the crew find themselves trapped inside.

A simple technical fault? Sabotage? Or something even more sinister? Tension mounts as the Doctor and his companions begin to suspect one another.

What has happened to the TARDIS? Slowly a terrifying suspicion dawns. Has the TARDIS become the prisoner of some powerful fifth intelligence which is even now haunting the time-machine's dark and gloomy corridors?

This Target Book was released as an audiobook on 6 January 2011 complete and unabridged by BBC Audio and read by William Russell. 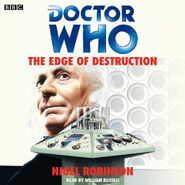