The Drosten's Curse was a 2015 Fourth Doctor novel, and unusual for being a Fourth Doctor novel published while the BBC Wales television series featured another incumbent Doctor. It was an extended and expanded version of the Time Trips short story The Death Pit, originally released in 2013.

Isn't life terrible? Isn't it all going to end in tears? Won't it be good to just give up and let something else run my mind, my life?

Something distinctly odd is going on in Arbroath. It could be to do with golfers being dragged down into the bunkers at the Fetch Brothers' Golf Spa Hotel, never to be seen again. It might be related to the strange twin grandchildren of the equally strange Mrs Fetch — owner of the hotel and fascinated with octopuses. It could be the fact that people in the surrounding area suddenly know what others are thinking, without anyone saying a word.

Whatever it is, the Doctor is most at home when faced with the distinctly odd. With the help of Fetch Brothers' Junior Receptionist Bryony, he'll get to the bottom of things. Just so long as he does so in time to save Bryony from quite literally losing her mind, and the entire world from destruction.

Because something huge, ancient and alien lies hidden beneath the ground – and it's starting to wake up...

Paul Harris, a wealthy golfer, is suddenly pulled down by a golf bunker. He reflects that his golfing partner, David Agnew, had abandoned him but was actually quite irritating. Unknown to Paul, he is being consumed by an ancient, forgotten creature. The creature is able to psychically sedate Paul so he only feels mild distress. He eventually is completely engulfed by the sand.

On 2 June 1978, Bryony Mailer is working as the Junior Day Receptionist at the Fetch Brothers Golf Spa Hotel. Although usually being ordered by the hotel's manager Mangold, she has a few minutes to spare. She decides to get tea and walks down the hallway towards the staff office. Unbeknownst to Bryony, two figures emerge from the wallpaper. She turns around only to see the Fetch twins, Honor and Xavier, the grandchildren of the hotel's reclusive owner Julia Fetch. They invite Bryony to tea with her. She accepts.

Out on the golf course, a peculiar man looks longingly at Bryony...

Bryony, having returned to her desk, is deep in thought when a very tall man tells her not to worry. He asks if it is January and if he is in Chicago, but Bryony replies they are a few miles outside Arbroath in June. The man says it is close enough and introduces himself as the Doctor. She tells him he should stay at the resort, feeling he is very friendly and familiar.

In her cottage at the edge of the estate, Julia Fetch organizes her glass octopus collection. Although forgetful, she reflects she has a wonderful life with her grandchildren.

The strange man from the golf course wanders into the golf bar, where David Agnew is thinking about how satisfactory the world is. The stranger stammers and introduces himself as Ian Patterson, explaining he doesn't understand golf. Agnew decides to give him a golfing lesson, although Patterson finds it strange he only said he needed fifteen minutes. He then dejectedly spots Bryony talking to a curly-haired man.

While talking to Bryony, the Doctor is able to think at the same time. He wonders why the TARDIS brought him here, and why he has a metallic taste in his mouth similar to that of Maillindian Fever Beans. He considers a Telepathic Clamp, but realises no one on Earth would have one and very few creatures could produce something similar, and such creatures would already have been noticed. He also wonders why Patterson did not talk to Bryony when he clearly loved her. Suddenly, a massive thought overloads all of the Doctor's neurons and he falls over, only able to think, "fascinating". 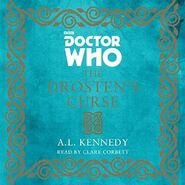