The Doctor remembers Dulkis from a previous visit as a civilised and peaceful place. But times have changed, and his second trip is not quite the holiday he was expecting.

The Dulcians themselves are more reluctant than ever before to engage in acts of violence. The so-called Island of Death, once used as an atomic test site, has served as a dire warning to generations of Dulcians of the horrifying consequences of warfare. But an alien race prepares to take advantage of their pacifism...

The whole planet and its passive inhabitants are threatened with complete annihilation - and no one it seems, is going to lift a finger to stop the evil Dominators and their unquestioning robot slaves.

Dulkis. A planet where war has been outlawed and where the Island of Death, once used as an atomic test site, has served as a dire warning to generations of Dulcians of the horrifying consequences of war.

But an alien race prepares to take advantage of their pacifism; the whole planet is threatened with annihilation by the Dominators and their robot slaves...

The five episodes of The Dominators, first broadcast in 1968 and featuring Patrick Troughton in the role of the Doctor, were written by Mervyn Haisman and Henry Lincoln under the shared pseudonym "Norman Ashby". This book, originally published in 1984, is by the late Ian Marter, who novelized several Doctor Who stories and who played the role of TARDIS traveller Harry Sullivan from 1974 to 1975.

Doctor Who - The Dominators is available on BBC Video and has recently been broadcast on BSB television.

This Target Book was released as an audiobook on 6 September 2018 complete and unabridged by BBC Audio and read by Michael Troughton. 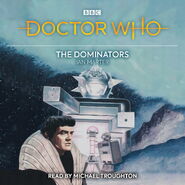