The Diary of River Song: Series One was a full cast audio anthology released in December 2015 by Big Finish Productions. It starred River Song, played by Alex Kingston, and featured the Eighth Doctor, played by Paul McGann.

River Song has had more than enough excitement for a while. Deciding the universe — and her husband — can look after themselves, she has immersed herself in early 20th century academia, absorbed in writing archaeological theses.

But when a mysterious tomb is found in a dry, distant land, excitement comes looking for River.

Can Professor Song stop any more members of the expedition from dying? What deadly secrets lie buried within the crypt? And will British Consul Bertie Potts prove to be a help, or a hindrance?

1.2 I Went to a Marvellous Party by Justin Richards

River Song always enjoys a good party, even when she's not entirely sure where or when the party is taking place. But the party she ends up at is one where not everything — or indeed everyone — is what it seems...

River is confident she can find the killer. But can she identify them before anyone else — or quite possibly everyone else — gets killed?

River Song is on the trail of the mysterious, planet-killing SporeShips.

Nobody knows where they come from. Nobody knows why they are here. All they do know is that wherever the SporeShips appear, whole civilisations are reduced to mulch.

But River has help. Her companion is a handsome time-travelling stranger, someone with specialist knowledge of the oddities and dangers the universe has to offer. For Mr Song has a connection to River's future, and he would never want his wife to face those perils alone...

1.4 The Rulers of the Universe by Matt Fitton

As shocking secrets are exposed, and a grand plan for the universe is revealed, River decides it's time she took control of events once and for all.

Out in deep space, a clandestine society faces off with an ancient and powerful alien force — but, for River, there's an added complication.

The Eighth Doctor has been caught in the middle, and she must make sure her future husband can arrive at his own destiny with all his memories — not to mention his lives — intact... 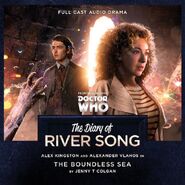 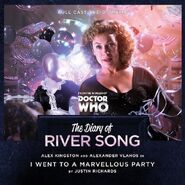 I Went to a Marvellous Party 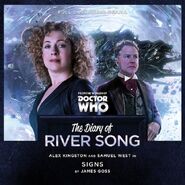 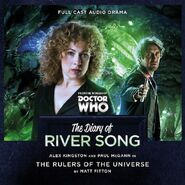 The Rulers of the Universe

Retrieved from "https://tardis.fandom.com/wiki/The_Diary_of_River_Song:_Series_One?oldid=2731806"
Community content is available under CC-BY-SA unless otherwise noted.