If this is a top secret naval camp, I'm Lord Nelson!

Ace has a poor opinion of the security arrangements at Commander Millington's North Yorkshire base – and she's less than comfortable in 1940s fashions. But the Doctor has graver matters on his mind.

Dr Judson, inventor of the Navy's ULTIMA code-breaker, is using the machine to decipher the runic inscriptions in the crypt of the nearby church.

Commander Millington is obsessed with his research into toxic bombs that he insists will hasten the end of World War Two.

A squad of the Red Army's crack Special Missions brigade lands on the Yorkshire coast with instructions to steal the ULTIMA device – unaware that Millington has turned it into a devastating secret weapon.

And beneath the waters at Maidens Point an ancient evil stirs...

The Doctor uncovers mysteries concealed within villainous plots – but what connects them all to a thousand-year-old curse?

The TARDIS brings the Doctor and Ace to 1943, and a British Naval camp in North Yorkshire. Dr Judson is using the ULTIMA code-breaking machine to decipher the runic inscriptions at the nearby church; meanwhile Commander Millington is obsessed with his research into toxic bombs that will hasten the end of World War Two.

Nearby, and ancient evil stirs beneath the waters at Maindens Point. What connects all these to a thousand year old curse?

This Target Book was released on 3 September 2015 complete and unabridged by BBC Physical Audio and read by Terry Molloy. 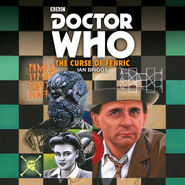 Retrieved from "https://tardis.fandom.com/wiki/The_Curse_of_Fenric_(novelisation)?oldid=2817159"
Community content is available under CC-BY-SA unless otherwise noted.