The Crimson Horror was a novelisation based on the 2013 television episode The Crimson Horror. It was written by the original writer Mark Gatiss and released by Target Books on 11 March 2021.

'We must get to the bottom of this dark and queer business, no matter what the cost!'

Something ghastly is afoot in Victorian Yorkshire. Something that kills. Bodies are washing up in the canal, their skin a waxy, glowing red… But just what is this crimson horror?

Madam Vastra, Jenny and Strax are despatched to investigate the mystery. Strangely reluctant to assist their enquiries is Mrs Winifred Gillyflower, matriarch of ‘Sweetville’, a seemingly utopian workers’ community.

Why do all roads lead to the team's old friends Clara and the Doctor?

And will the motley gang be in time to defeat the mysterious power that threatens all the world with its poison?

This Target Book was released as an audiobook on 11 March 2021 complete and unabridged by BBC Audio and read by Catrin Stewart with Strax's voice by Dan Starkey. 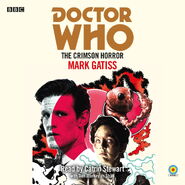