The Creeping Death was the third and final story in The Tenth Doctor Adventures: Volume Three, produced by Big Finish Productions. It was written by Roy Gill and featured David Tennant as the Tenth Doctor and Catherine Tate as Donna Noble.

London, 1952, and a deadly smog envelops the capital. But something even more dangerous - and alien - is hiding within the mists.

When the Doctor and Donna get lost in the fog, they find a motley group of Londoners trying to make their way home.

Soon the stakes are raised, as death creeps along fume-choked streets, and not everyone will make it out alive.... 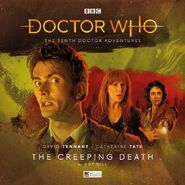 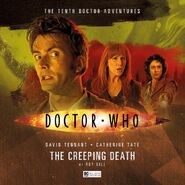 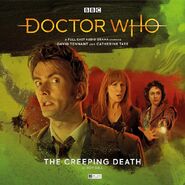