The Crawling Terror was the fifty-sixth novel in the BBC New Series Adventures series. It was written by Mike Tucker and featured the Twelfth Doctor and Clara Oswald.

"Well, I doubt you'll ever see a bigger insect."

Gabby Nichols is putting her son to bed when she hears her daughter cry out. "Mummy there's a daddy longlegs in my room!" Then the screaming starts... Alan Travers is heading home from the pub when something rushes his face — a spider's web. Then something huge and deadly lumbers from the shadows... Kevin Alperton is on his way to school when he is attacked by a mosquito. A big one. Then things get dangerous.

But it isn't the dead man cocooned inside a huge mass of web that worries the Doctor. It isn't the swarming, mutated insects that make him nervous. It isn't an old man's garbled memories of past dangers that intrigue him.

With the village cut off from the outside world, and the insects becoming more and more dangerous, the Doctor knows that no one is safe. Not unless he can decode the strange symbols engraved on an ancient stone circle, and unravel a mystery dating back to the Second World War. 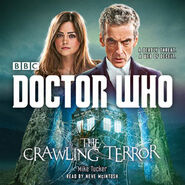