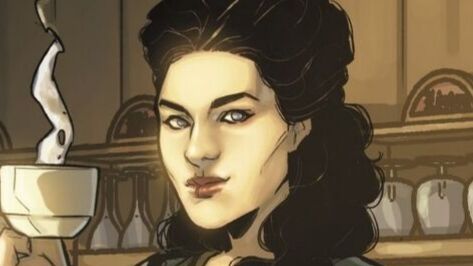 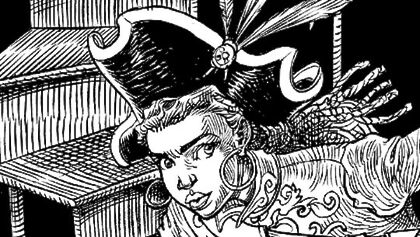 PROSE: One Virtue, and a Thousand Crimes

The Corsair was a Time Lord adventurer and an old friend of the Doctor, described by the Eleventh Doctor as "one of the good ones." The Corsair changed gender a few times throughout their many incarnations. The Doctor noted with fondness that when the Corsair was female, "she was a bad girl." (TV: The Doctor's Wife)

Like all Time Lords, the Corsair was taken from their family at the age of eight, for the selection process in the Drylands. Staring into the Untempered Schism as part of a Time Lord initiation rite, the Corsair reacted by running away from what they saw in the Schism. (PROSE: A Brief History of Time Lords)

At some point in their lives, the Corsair left Gallifrey in their Type 60 TARDIS to travel the universe. They named the TARDIS Esperanza. (PROSE: One Virtue, and a Thousand Crimes) Each one of the Corsair's incarnations had the symbol of the Ouroboros tattooed somewhere on their body. It changed size each time with each different regeneration. Without it, they did not feel themselves. (TV: The Doctor's Wife)

At least one of the Corsair's incarnations was female. (PROSE: Keeping up with the Joneses) The Fourth Doctor once said to Romana II that he should meet up with the Corsair sometime, referring to the Corsair as both a man and woman when he did so. (PROSE: Shada) According to the Eleventh Doctor, the Corsair was a woman a couple of times, saying she was "a bad girl" each time. (TV: The Doctor's Wife)

According to the Ninth Doctor, the Corsair kept a sub-dimensional void in a hatbox in 23rd century Swindon. (COMIC: Weapons of Past Destruction)

The Corsair and the Doctor have ended up in jail cells on more than one occasion. The Thirteenth Doctor noted the last time the two of them had a drink together, the Doctor woke up in a bank vault. (COMIC: Old Friends)

One incarnation of the Corsair was a dark-haired woman who wore pirate clothing and was proficient at sword fighting. Her Ouroboros tattoo was located on her left wrist. She stole the Gem of Niag from the Devivians to return it to the people of Pppppppppppplun on the behalf of a third party who put out a Want Ad for her services. She intentionally allowed the organ scan to detect her as an alien, at the request of her employer. The Thirteenth Doctor was arrested instead of the Corsair because she had a similar binary vascular system. The Corsair went to a pub on another planet with her TARDIS where she was found by the Thirteenth Doctor and her companions Graham, Yaz, and Ryan.

At first, the Corsair didn't recognise the Doctor because of her new incarnation, and when the Doctor reminded the Corsair about one of their last encounters which saw them waking up drunk in a bank vault, the Corsair remarked that didn't narrow it down for her. After recognising the Doctor from her destroying the killgun of an alien, holding another at gunpoint, and fighting through a pub brawl with a sword, the Corsair explained her actions to the Doctor over tea, complimenting the Doctor's more heroic behavior as something she was aspiring to. She then confessed that she needed the Doctor's help with a heist of sorts. After taking time to think over it, the Doctor agreed and asked about the job. (COMIC: Old Friends)

The Corsair later reunited with Graham, Ryan and Yaz in 2020 whilst the Doctor had left them briefly to fix a problem in her timeline. She greeted the Doctor upon her return. (COMIC: Alternating Current)

Another incarnation of the Corsair was a dark-skinned woman with scarlet hair. She travelled with a Parrot as her companion. She wore a viridian green coat, with tan leather and dark cherry coloured clothes which were patched and bartered. She also wore a tricorn hat with hyacinth blue plumes that were donated by her Parrot companion after a moult. As a favour for the Doctor, she travelled to the City Obsidian in the Imperial Edifice of Infinite Steps to steal the Hand of Omega. Although pursued by troop ships belonging to the Supreme Leader, she escaped with the Hand of Omega and managed to deliver it to the First Doctor prior to him leaving Gallifrey as instructed. However, her Parrot companion did leave a single blue feather behind, which was discovered by the Supreme Leader. (PROSE: One Virtue, and a Thousand Crimes)

An incarnation of the Corsair, described as a "strapping big fellow" with "a trustworthy face" visited the Supreme Leader to collect the feather left behind by his Parrot companion. He also collected a reward for supplying information on the mysterious woman and bird whom had escaped the Supreme Leader. He disappeared, and was never heard from again. (PROSE: One Virtue, and a Thousand Crimes)

The final incarnation of the Corsair was described by Auntie, a composite humanoid servant of House, as "a strapping big bloke". She was a good authority on the matter; after all, she had the Corsair's left arm stitched onto her torso in place of her own, while the other composite humanoid slave, "Uncle", received "the spine and the kidneys". The Corsair went the way of House's numerous other Time Lord victims who had fallen into House's bubble universe and was marooned when his TARDIS was drained of energy. The Corsair had only just enough time to get a message together before he was finally killed.

The Eleventh Doctor discovered the Corsair's fate after being contacted by a hypercube with their peculiar Ouroboros symbol and following its psychically encoded distress message to House. He eventually discovered the Corsair's remains in Auntie and Uncle; this and the stockpile of hypercubes House used as bait cemented his fury in confronting and defeating House with Idris. (TV: The Doctor's Wife)

In one account of events of the rediscovery of Shada, the Fourth Doctor mentioned the Corsair while he and Romana II mused over Time Lords who broke with traditional Gallifreyan inactivity, considering him "one of the good 'uns" and desiring to catch up with her. (PROSE: Shada)

During one adventure, while pushing a heavy crate, the Eleventh Doctor said that if he kept up this habit, he would develop big arms like the Corsair. (GAME: The Eternity Clock)

In The Brilliant Book 2012, a book that contains non-narrative information, Neil Gaiman provided more information in "Eleven Things You Probably Didn't Know About the Corsair".

Artist Roberta Ingranata confirmed these details influenced her work on the comic story Old Friends.[1] The Corsair's pirate ship TARDIS, not travelling with companions, the drinking with the Doctor, and waking up in a bank vault were acknowledged in the comic story. She was inspired by the actress Julianna Margulies.[2]

Neil Gaiman has stated that the incarnation of the Corsair portrayed in Jody Houser's comic story Old Friends was intended to be the Sixth Corsair, as confirmed by Houser herself.[3] This previously unmentioned incarnation had the Ouroboros tattoo on her left wrist.

Gaiman has also stated that the incarnation in his short story One Virtue, and a Thousand Crimes was in fact the Seventh Corsair.[4]

Specific attributes and details about the Corsair's incarnations were first provided in The Brilliant Book 2012:

Additionally, seven images of the Corsair's incarnations are provided, albeit unnumbered:

The Corsair's TARDIS looked like a pirate ship whenever it was practical and sometimes when it was impractical.

The Ouroboros tattoo trademark of the Corsair — a snake eating its own tail, symbolising eternity — moved around the Corsair's body with each regeneration.

The Corsair's final adventure was when he was working on the Time Lords' Fourth Universal Survey. He was in his ninth incarnation when House killed him.

The Doctor and Corsair had many adventures together, getting drunk in the Corsair's fourth, fifth, and eighth incarnations. Twice they woke up in jail and once in the Bank of England vaults.

Amongst their secret missions for the Time Lords, the Corsair stole the Callisto Pulse from the Callistan Kleptocracy. The Corsair denied stealing it and Time Lords denied asking him to steal it.

The Seventh Corsair had an unclear involvement with Daleks that left them with their arms removed and fused together in a rude Skarosian shape.

They visited Earth several times. He was once worshipped as a god by the Assyrians but left with the sacred temple cat after getting bored.

No matter which race or gender, the Corsair had an amazing and trustworthy smile.

The Corsair preferred to travel alone, but liked having a cat or a parrot on his TARDIS.

The Corsair was formally censured by the Time Lords after they may have been linked to the theft of the Portrait of Rassilon. This was overturned by Lady President Flavia, perhaps due to the Corsair's smile.