The Companion Chronicles was a Big Finish Productions audio series that ran for eighty monthly releases across eight series between 2007 and 2014, before relaunching with yearly box set releases thereafter.

The general, but not invariable, ambition of the series was to tell stories using the companions of the first four Doctors. The typical release in the range used just two actors, a musical score, some foley work and sound design — meaning that the end result sat somewhere between an audio book and a full-cast drama.

Originally, the concept was to produce talking books featuring the companions of the first four incarnations of the Doctor who were unavailable to take part in the main range. While the range has remained primarily focused on companions who appeared earlier than Season 19, most releases in the range have not been true "talking books". In fact, all but one release — The Stealers from Saiph — use the convention of at least two characters in conversation with each other. Most have a sound design worthy of any title in the main range. On rare occasions, the range has moved away from its titular concern and featured characters who are more commonly considered "prominent guest stars" or "allies", such as King Peladon and Henry Gordon Jago.

In general, Companion Chronicles have a fairly standard format. They are usually two, approximately 25 minute long episodes divided by a single cliffhanger, barring special double length releases released regularly each season from the fourth onwards. The part of the story that has to do with the Doctor is almost always told in flashback, as a recollection of a past adventure. Thus, the central character of the piece (i.e., the companion) is often depicted in two time periods. That is, there is typically an "older" version of the companion who recounts the adventure with the Doctor, and the "younger" version of the character, who is as he or she appeared on television.

The actor not portraying a companion is used in a variety of ways to allow stories in the range to have markedly different structures. Some common narrative uses for the second actor are:

Sometimes, the interrogator is revealed to be the principal adversary, as in Mother Russia or Frostfire; sometimes the listener knows the interrogator is the adversary right from the start, as with The Catalyst. In any case, the relationship between ex-companion and interrogator is usually a pretty obvious "framing device", which takes up a clear minority of the runtime of the release. However, in a few rare cases, as with the Home Truths trilogy, the interrogator is a co-star equal with the featured character and is given a a proper story with the "present day" companion woven into the companion's recollections of the Doctor's TARDIS.

The 2011 release Tales from the Vault was a departure from the "enhanced audiobook" format, being effectively a straight audio drama (albeit still one with a limited cast) that incorporated interviews with various companions.

A few of the plays tie in to others in the Big Finish Doctor Who range. The Darkening Eye is a prequel to The Death Collectors; Night's Black Agents explicitly occurs between City of Spires and The Wreck of the Titan; the Leela trilogy which begins with The Catalyst relies to some degree on the listener's knowledge of the Gallifrey audio series; and The Prisoner's Dilemma occupies a complicated narrative space, tying together the Virgin New Adventures with Big Finish's Key 2 Time series.

All the plays add to the their main characters' televised continuities. Some detail an adventure that adds little to their lives; for instance, Mother Russia gives Steven an adventure in Napoleonic Russia between the main narrative of The Gunfighters and its conclusory scenes, which lead into The Savages. Even the interchange with his interrogator is set within the main story. Thus, Steven gains merely another adventure that fits neatly in his established, televised timeline.

By contrast, other plays expand greatly on the known fates of their principal character/s. For instance, the trilogy of stories featuring Sara Kingdom, the main narratives of which take place between episodes of The Daleks' Master Plan, reveals that she had other adventures with Steven and the Doctor besides the quest for taranium which was the central plot of her televised adventure. More significantly, the trilogy also gives Sara, or at least her consciousness, a thousand-year-lifespan, a way to have met a different incarnation of the Doctor and thus a second chance to travel in the TARDIS.

Most plays settle somewhere between these two extremes. Thanks in part to the typical interrogative "framing device", most of the plays reveal something about the lives of the Doctor's companions after leaving him. In the very first Companion Chronicle, for instance, Vicki is shown to have remained with Troilus and to have had a large family. Equally, the series shows that Susan Foreman stayed with David Campbell, Jo Jones continued her globe-trotting life with Dr. Clifford Jones and Victoria settled down to raise a family.

The First Doctor: Volume One[]

The Second Doctor: Volume One[] 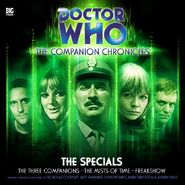 The Companion Chronicles: The Specials 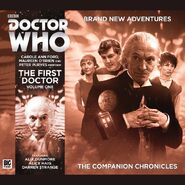 The First Doctor: Volume One 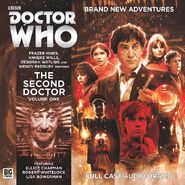 The Second Doctor: Volume One 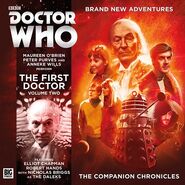 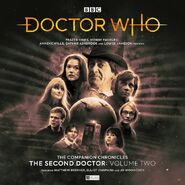 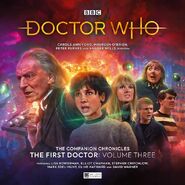 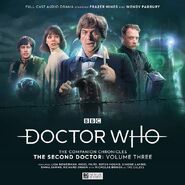