The Clockwise Man was the first novel in the BBC New Series Adventures series. It was written by Justin Richards and featured the Ninth Doctor and Rose Tyler.

Who is the Painted Lady and why is she so interested in the Doctor? How can a cat return from the dead? Can anyone be trusted to tell — or even to know — the truth?

Peter Dickson, a footman taking a smoking break, sees a black cat with a triangle of white fur under it's chin just before he is attacked by some sort of clockwork machine, which interrogates him. He is saved by the Ninth Doctor and Rose Tyler, who are visiting to see The Great Exhibition. 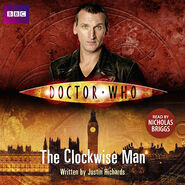