The Churchill Years: Volume One was an audio anthology box set featuring Winston Churchill as played by Ian McNeice in the new series of Doctor Who. It was the first Big Finish release to feature the Ninth, Tenth, and Eleventh Doctors, although the roles were not performed by their original actors, the roles were instead filled by McNeice as his Churchill character served as narrator for the stories.

1. The Oncoming Storm by Phil Mulryne

Late 1939. Britain faces the might of Germany. Winston Churchill serves as First Lord of the Admiralty. But Churchill soon finds himself facing a more immediate threat than the looming Nazi menace. A 'Stone' with the most mysterious properties is discovered in the Thames' sands, and soon oddly spoken soldiers are creeping round London ruthlessly trying to acquire it. Who are they? Can Churchill and his new secretary Hetty Warner defeat them? And what about the man in the battered leather jacket that Hetty meets? Churchill feels sure they can rely on the Doctor to help them! Except that this Doctor seems to want to stay hidden in the shadows...

In the dark days of 1941, Britain is in the midst of war. Churchill must stand strong against the might of the enemy – but he is plagued by a darkness in his own psyche. Something he calls 'the Black Dog'.

Can a visiting Swami hold the answer to his troubles? And can Hetty Warner prevent the Prime Minister's adversaries from taking advantage of the situation?

Across London, the Tenth Doctor's arrival may be the nation's only hope – but the Time Lord's plan to help his friend is endangered when he finds himself declared a traitor by the agents of the country he has come to protect...

Finally given the chance to travel in the TARDIS, Winston Churchill cannot resist the opportunity of meeting Julius Caesar. But the trip does not go quite as planned. With the TARDIS gone, and Churchill stranded in ancient Britain with a young man he barely knows and who comes from the future, it seems things can hardly get any worse.

Until he is captured by the invading Romans.

Still, at least that means Churchill will meet Julius Caesar after all. But then Churchill learns of the Bronze God, feared and worshipped by the Ancient Britons. A god that he recognises as anything but divine when he meets it.

4. The Chartwell Metamorphosis by Ken Bentley

Comfortably retired to his home at Chartwell, Churchill plans to live out his days in peace, in the company of his butterflies – if his attendants would just leave him alone.

But it isn't simply Lepidoptera breeding in the gardens, as a far more sinister species is about to emerge from its cocoon – and is ready to feast on something more than just the shrubberies.

Surrounded on all sides, the former Prime Minister must put a life's worth of experience into action in order to win the day. Can his new nurse Lily Arwell offer her assistance? 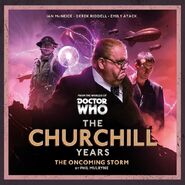 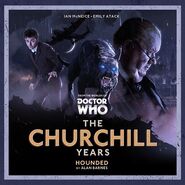 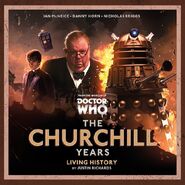 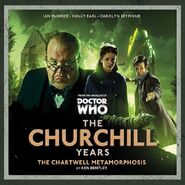 Retrieved from "https://tardis.fandom.com/wiki/The_Churchill_Years:_Volume_One?oldid=2737577"
Community content is available under CC-BY-SA unless otherwise noted.