You may wish to consult The Chase (disambiguation) for other, similarly-named pages.

The Chase was a novelisation based on the 1965 television serial The Chase.

Through a Space-Time Visualiser the Doctor and his companions are horrified to see an execution squad of Daleks about to leave Skaro on a mission to find the TARDIS and exterminate the time travellers.

Eluding the Daleks on the barren planet Aridius the Doctor and his friends escape in the TARDIS. But this is only the beginning of an epic journey.

As they travel through space and time, they try to shake off their pursuers by making a series of random landings - but the Daleks don't give up easily. This is a chase to the death...

'THOSE WHO CONTROL THE TARDIS HAVE INTERFERED WITH TOO MANY OF OUR PLANS, THEY ARE TO BE DESTROYED. IF NECESSARY, THE ASSASSINATION GROUP WILL PURSUE THEM THROUGH ALL ETERNITY. EXTERMINATE THEM!'

But now, the Daleks can track them through all of time and space. They try to shake off their attackers by making a series of random landings, but this is a chase to the death...

Doctor Who - The Chase, written by Terry Nation, the creator of the Daleks, was first broadcast in 1965, with William Hartnell playing the role of the Doctor. This adaptation is by John Peel, who is also the author of The Gallifrey Chronicles, the definitive history of the Doctor's home planet and its people.

Doctor Who - The Chase is available as a BBC Video.

John Peel states in the Author's Notes that he decided to novelise Terry Nation's original scripts rather than simply recreate the televised story. His reasoning for doing so was that The Chase existed in full in the BBC archives, so novelising the original scripts would give readers something different. Despite this, the novel reads largely similar to the televised version with a number of the details expanded:

This Target Book was released as an audiobook on 7 July 2011 complete and unabridged by BBC Audio and read by Maureen O'Brien, with Dalek voices by Nicholas Briggs. 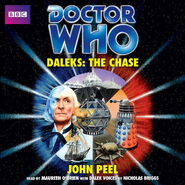