The Brain of Morbius was the fifth serial of season 13 of Doctor Who. It referred to the Doctor's past and had a scene featuring mindbending that introduced contentious elements to the shows' mythos. The story was influenced by Mary Shelley's Frankenstein and the film adaptations thereof.

Condo angrily confronts his master about being offered in the Doctor's place. Solon begs for his life, promising to replace Condo's hook with a real hand. This calms the hulking servant for the moment. Solon, in a secret lab, talks to an unseen voice who berates him for the delay in finishing the body. Solon persuades the voice, whom he calls Morbius, for more time. The Doctor arrives with Sarah for a consultation. Solon informs them the Elixir is the only remedy for her blindness. The Doctor resolves to return to the Sisterhood to obtain it. Solon sends Condo with a message to the Sisterhood, again asking for the Doctor's head. Solon exits, and Sarah hears the voice and follows it into the lab. She cannot see that the voice of Morbius emanates from a disembodied brain in a large vat. The brain accuses her of being an agent of the Sisterhood sent to destroy him. 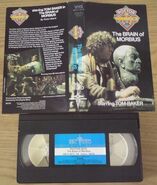 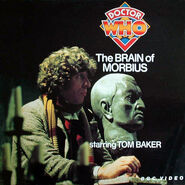 Retrieved from "https://tardis.fandom.com/wiki/The_Brain_of_Morbius_(TV_story)?oldid=2815161"
Community content is available under CC-BY-SA unless otherwise noted.