The Blood Cell was the fifty-fourth novel in the BBC New Series Adventures series. It was written by James Goss and featured the Twelfth Doctor and Clara Oswald.

"Release the Doctor — or the killing will start."

An asteroid in the furthest reaches of space — the most secure prison for the most dangerous of criminals. The Governor is responsible for the worst fraudsters and the cruellest murderers. So he's certainly not impressed by the arrival of the man they're calling the most dangerous criminal in the quadrant. Or, as he prefers to be known, the Doctor.

What does impress the Governor is the way the new prisoner immediately sets about trying to escape. And keeps trying. Finally, he sends for the Doctor and asks him why? But the answer surprises even the Governor. And then there's the threat — unless the Governor listens to the Doctor, a lot of people will die.

Who is the Doctor and what's he really doing here? Why does he want to help the Governor? And who is the young woman who comes every day to visit him, only to be turned away by the guards?

When the killing finally starts, the Governor begins to get his answers... 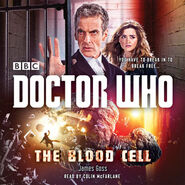