Tardis
Register
Don't have an account?
Sign In
Advertisement
in: First Doctor novelisations, The History Collection novels, 1984 novels,
and 2 more

The Aztecs was a novelisation based on the 1964 television serial The Aztecs.

The TARDIS materialises in Mexico during the Aztec civilisation. The Doctor and his companions step outside to discover they are inside a tomb - the tomb, it turns out, of Yetaxa, once High Priest of the Aztecs.

Barbara is hailed as Yetaxa's reincarnation by Autloc, High Priest of Knowledge, and Tlotoxl, High Priest of Sacrifice, when they find her in the precincts of the tomb wearing the bracelet of the deceased Priest, now revered as a god.

And she takes advantage of her position of unaccustomed power to try and dissuade the Aztecs from practising human sacrifice...

THE DOCTOR STOOD UP. 'THERE'S TO BE A HUMAN SACRIFICE AT SUNSET,' HE SAID. 'IAN IS TO ESCORT THE CHOSEN VICTIM TO THE AULTAR.'

When the Doctor, Susan, Ian and Barbara arrive accidentally in ancient Mexico, Barbara is mistaken for a god by the Aztecs. Horrified by the barbarous practice of human sacrifice which she is forced to observe, she is determined to use her power to prevent such atrocities from ever happening again. The Doctor must use every means in his power to prevent her from interfering with the natural course of history, but he himself is occupied by other matters - such as the rather attractive Cameca...

This is a novelisation by John Lucarotti of his own television story, first broadcast in 1964 and featuring William Hartnell as the first Doctor.

This Target Book was released as an audiobook on 2 August 2012 complete and unabridged by BBC Audio and read by William Russell. 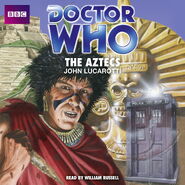