The Doctor has promised Tegan that they will visit her grandfather in the English village of Little Hodcombe, in the year 1984, a precision of timing and location that the TARDIS has not always achieved...

When the Type-40 machine comes to rest, the view on the scanner screen only serves to confirm Tegan's rather low expectations of the TARDIS' performance.

The most sensible course of action would be to leave immediately – but despite Turlough's protests the Doctor rushes out to take on a seemingly hopeless rescue mission...

The Doctor has promised Tegan that he will take her to visit her grandfather's village of Little Hodcombe. But all is not well in this little village - the whole population is involved in a war game that seems even more sinister, and little Hodcombe itself is surrounded by an energy field. Something is very wrong indeed, and the Doctor, Turlough and Tegan take on what seems to be a hopeless rescue mission.

This is a novelization by Eric Pringle of his own original story, first broadcast in 1984 and featuring Peter Davison in the role of the Doctor.

May Day is approaching in the English village of Little Hodcombe, scene of an ancient Civil War battle. When the TARDIS arrives, the Doctor's companion, Tegan, is hoping to visit her grandfather. Yet the travellers learn that he has mysteriously disappeared, and the planned re-enactment of the battle has taken on a menacing tone.

Local schoolteacher Jane Hampden knows how the county squire plans to celebrate May Day: with the May Queen meeting a grisly end. Can Jane make the villages see sense, or are they under the influence of some unseen force? The village church holds the clues to what is happening in Little Hodcombe, and soon the Doctor is facing an ancient alien foe. Can he and his friends triumph against it?

This Target Book was released as an audiobook on 5 August 2010 complete and unabridged by BBC Audio and read by Nerys Hughes. 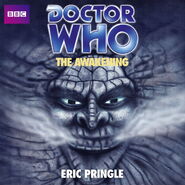