The Ark in Space (TV story)

The Ark in Space

Doctor Who and the Ark in Space

The Ark in Space was the second serial of season 12 of Doctor Who. It was the Fourth Doctor's first full, post-regenerative story. It proceeded from a mild-cliffhanger at the end of Robot, showing what happened after Harry Sullivan climbed into the police box in UNIT's laboratory. It importantly established the location of Nerva Beacon, which would be the narrative lynchpin of the season.

The Ark in Space had a somewhat tortuous scripting process, having slipped past two writers before its scripts were finally accepted. Both Christopher Langley and John Lucarotti tried and failed to write a script about a space station for season 12. Of the two, Lucarotti came closest. However, because he then lived on a boat anchored in the Mediterranean — and there was a postal strike afflicting Corsica — Lucarotti was essentially incommunicado to script editor Robert Holmes. It was impossible for Holmes to conduct timely consultation with the Doctor Who veteran. Lucarotti was paid fully for his work, and Holmes undertook a page one rewrite, retaining only the central concept of Lucarotti's tale. (INFO: The Ark in Space)

Despite its difficult birth, the story won kudos from the BBC Wales production staff. Russell T Davies once called The Ark in Space his favourite storyline of the 1963 version of Doctor Who, (DOC: Inside the World of Doctor Who) and Steven Moffat considered it the best Fourth Doctor story, (REF: DWM 457) while Barnaby Edwards confessed to being "petrified of the Wirrn" as a child. (CON: Do You Remember the First Time?) Tom Baker himself has also stated that, of all the stories he'd filmed, The Ark in Space was his favourite.

From a production standpoint, it was the first story produced by Philip Hinchcliffe, the new producer after Barry Letts departed from the show. He established a new, darker and ostensibly "Gothic" style of storytelling during his time as the producer of Doctor Who, although this particular story only demonstrated the former trait, being more in the genre of the ‘space opera horror’ later popularised by Alien. Notably, a much later TV story, would inadvertently find itself mimicking a contemporary of the same genre.

The TARDIS lands on a space station orbiting Earth in the distant future. It's seemingly deserted, but the Doctor, Sarah and Harry soon discover that they are not alone. Thousands of humans are in cryogenic sleep, and while they've slept their Ark has been invaded. A parasitic insect race, the Wirrn, have taken control and threaten the very future of mankind.

An unseen presence approaches a space station orbiting Earth and silently infiltrates it. It reaches a human apparently asleep and unaware...

The TARDIS materialises in a dark and stuffy room aboard an apparently unmanned station, due to Harry's inadvertent interference with the helmic regulator. Once the Doctor turns the lights on, the TARDIS crew decide to look around. Harry presses another switch, unknowingly trapping Sarah in a small control room where the oxygen is rapidly being consumed. By the time the Doctor and Harry find her, she is severely cyanosed. They then find themselves trapped with her. The Doctor repairs the oxygen servos just in time to save them all. He notices that the control cables have been bitten clean through.

As Sarah recovers on a nearby couch, the Doctor and Harry are attacked by an automatic sentry system which fires electronic bolts at any moving organic object, including people, a cricket ball and the Doctor's scarf. Meanwhile, Sarah is transported from the couch on which she is resting, and into a chamber where she hears two voices preparing her for a "journey".

The Doctor and Harry deactivate the auto guard by distracting it with Harry's shoes and discover that Sarah has vanished. Exploring further into the station, they encounter a slime trail in the corridor but continue into a restricted section holding hundreds of cryogenically suspended humans, along with animal and botanical specimens and an information store. Harry opens a berth and finds Sarah in suspension. He begins looking for a resuscitation unit to revive her and opens a cupboard — only to encounter a giant insect which lurches at him...

The insect falls to the floor, obviously dead for a long time. The Doctor finds a medical kit but is unsure of how to use it. One of the sleeping pallets activates, and the occupant takes the medkit and sleepily uses it to revive herself fully. She introduces herself as Vira, First Med-tech, and demands to know what the TARDIS crew are doing aboard. She agrees to revive Sarah when she realises her suspension was an accident. Vira explains that solar flares were threatening to destroy Earth's ecosystem and that the government put a select group of humans in suspension on Space Station Nerva, so they could repopulate the Earth after five thousand years. She is astonished when the Doctor informs her that she has "overslept" by several thousand years because of the alien's sabotage. While she tries to revive the station commander, Lazar, or "Noah" as he is known, the power fails again.

The Doctor goes down to the station's infrastructure to effect repairs and sees a large, green grub in the solar collector, feeding on the solar energy. Noah revives and demands the TARDIS crew be removed before they contaminate the genetic pool. He arms himself and proceeds to the control room, where he stuns the Doctor. Vira notices that Dune, the station's chief technician, is missing from his pallet. Noah ascribes this to the "regressive" interlopers. He enters the infrastructure to look for any damage the Doctor may have done but is accosted by the grub, which touches his hand and renders him unconscious. Harry and Sarah find and wake the Doctor, only to be escorted back to the cryogenic section by Noah, who keeps his hand firmly tucked out of sight in his pocket.

As they return, Vira is reviving Libri, a young technician, who is instantly afraid of Noah when he first sees him. The commander begins to act erratically and insists the revivals be halted and that Dune is not missing, stating, "I am Dune", before storming out. The Doctor convinces Libri to go after Noah and stop him. He then proceeds to examine Dune's cryogenic pallet. He finds membrane from the alien queen's egg sac and concludes that the queen laid her eggs in Dune's body before she died, and the alien larvae have absorbed Dune's knowledge along with his body. Libri, meanwhile, finds Noah in the control room but cannot bring himself to shoot his commanding officer, who kills him before bringing his hand slowly from his pocket. He has started to metamorphose into an alien being.

The voice of the Earth High Minister comes over the station's P.A. system to deliver a rousing recorded speech for the awakening colonists, while Noah tries to fight the alien presence in his mind. He contacts Vira and transfers command to her, ordering her to get the sleepers revived and down to Earth as soon as she can. Before he loses control, he says the aliens are called the Wirrn and states, "We shall absorb the humans."

The Doctor and Vira go in search of Noah, leaving Harry and Sarah to revive two more crew members, Rogin and Lycett. Noah, more fully absorbed by the Wirrn, meets the Doctor and Vira in the main corridor and explains that the larvae are approaching adulthood. Vira takes what is happening to Noah very badly; the commander and she were "pair-bonded" for the colonisation.

Harry and the Doctor perform a brief autopsy of the queen and discover the Wirrn are a space-borne species. Vira begins to initiate the next phase of revivals but the Doctor convinces her to delay while he develops a plan to stop the Wirrn. Using the Ark's technology, he links his mind to the queen's neural cortex, experiencing her last few memories. Meanwhile, a grub breaks into the cryogenic chamber and kills Lycett. Harry and Rogin run to the armoury for fission guns, narrowly avoiding Noah, and drive the grub back into the air duct with the Doctor's help. The Doctor has learned that the queen was killed by the auto guard and decides to electrify the walls of the cryogenic section. He transmats Rogin and Harry to the control room before the power fails again and realises that the Wirrn must be pupating into adults. He goes down to the infrastructure to turn the power back on, but Noah has almost become an adult Wirrn and advances on the Doctor. The only thing that remains human about him is his face, and this then fades away to be replaced by the features of the Wirrn.

Vira appears at the top of the stairs and fires her stun gun at Noah, allowing the Doctor to get clear. Noah asks Vira to stay and listen to his proposal. If she and the awakened crew-members take the station's shuttle, he will order the swarm to let them go. The Wirrn will absorb the remaining sleepers and become a technologically advanced race, like the human pioneers who displaced them, centuries before, from their homeworld in the Andromeda Galaxy.

Vira refuses to abandon the Ark, and the crew try to come up with a way to ensure power will reach the Doctor's electric bulkheads. Sarah suggests the shuttle Noah mentioned and volunteers to carry a power cable through the service conduits to the cryogenic section.

As she proceeds past the Wirrn, they try to stop her and the shuttle crew from performing their tasks. Two Wirrn are repelled by a test burn from the shuttle's engines. Sarah gets stuck in the conduit and the Doctor uses reverse psychology, complaining that she is useless in an emergency and not nearly as tough or resourceful as she thinks she is, to help her get through. Sarah fights her way free, only to realise she has been "conned" by the Doctor. The electricity keeps the Wirrn at bay, but Noah threatens to turn off the oxygen, which the Wirrn don't need.

The Doctor tries to remind Noah of his human past and urges him to lead the swarm back into space where they belong, but Noah claims "I have no memory of the Earth." The entire swarm breaks into the shuttle's cargo hold and tries to reach the bridge. Vira sets the controls for automatic take-off and disembarks, while Rogin and the Doctor remove the synestic locks that hold the shuttle down. Rogin sacrifices himself by removing the final lock. He is killed by the shuttle's exhaust. As the Doctor wonders if Noah led the swarm aboard the shuttle on purpose, Noah radios the station and says goodbye to Vira before sabotaging the shuttle, making it explode in space and proving his humanity had won. Vira vows to get the sleepers revived and down to Earth, but without the shuttle they will have to rely on the transmat. The Doctor, however, notices that the transmat receptors on the ground are faulty and volunteers to beam down with Harry and Sarah to fix them. After they have done so, Vira smiles — the first human emotion she has shown — and then returns to her duties. 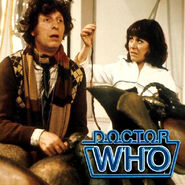 Excerpts from Dudley Simpson's score, arranged by Heathcliff Blair, were released by Silva Screen in the early 1990s on their compilation CD Pyramids of Mars: Classic Music from the Tom Baker Era (FILMCD 134).