The Ambassadors of Death (novelisation)

The Ambassadors of Death

The Ambassadors of Death

The Ambassadors of Death was the 1987 Target novelisation of the Doctor Who serial of the same name. It was written by Terrance Dicks, based upon a script by David Whitaker.

Seven months after it left Mars there has still been no radio communication with the Probe Seven spacecraft or the astronauts inside it. Back on Earth concern is mounting and eventually a recovery capsule is sent up to rescue the astronauts.

But when the capsule returns to Earth it is found to be empty. As the Doctor and Liz investigate, they discover that the interior of the capsule is highly radioactive: if anyone was inside they would now surely be dead.

Have the astronauts returned to Earth? And if not, who are the sinister space-suited figures who stalk the countryside and whose very touch means instant death?

THE DOCTOR SAT STARING AT THE TV SET LIKE A MAN HYPNOTIZED. 'THAT SOUND...I'VE HEARD IT BEFORE...'

Seven months after leaving Mars, the Probe 7 ship has not returned to Earth. And the rescue ship returns - poisoned with radiation and apparently abandoned. Whatever piloted it back to Earth is not human... The Doctor must negotiate with an alien intelligence for the return of its ambassadors - or face the destruction of the Earth...

The Doctor must negotiate with an alien intelligence for the return of its ambassadors - or face the destruction of the Earth...

The Ambassadors of Death, featuring Jon Pertwee as the Doctor, was written by David Whitaker and broadcast in 1970. This adaptation is by Terrance Dicks, who was script editor of Doctor Who for five years and who has written more than sixty novelizations of the television stories.

Doctor Who - The Ambassadors of Death has recently been broadcast on BSB television.

This Target Book was released as an audiobook on 4 January 2018 complete and unabridged by BBC Audio and read by Geoffrey Beevers. 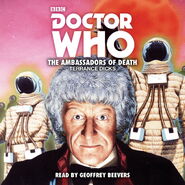