Terminus was a novelisation based on the 1983 television serial Terminus.

When the TARDIS console is wilfully sabotaged, the Doctor's time machine becomes dimensionally unstable and begins to dissolve. The area immediately affected is the room where Nyssa is working by herself.

As the creeping instability closes in on her, the TARDIS locks onto the nearest passing spacecraft, and the process of collapse is halted - but there is no sign of Nyssa.

Hoping that she has escaped onto the strangely deserted host liner, the Doctor goes looking for her. Whether or not he finds her, getting back to the TARDIS will be no easy business...

This Target Book was released as an audiobook on 1 August 2019 complete and unabridged by BBC Audio and read by Steven Pacey. 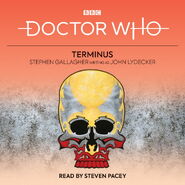