Back to page
Add topic

In terms of calendar time that the public would have perceived a character as being a regular on Doctor Who, the winner is Tegan, clocking in at thirteen days shy of three years from her first regular appearance in Logopolis on 28 February 1981 to her last regular appearance in Resurrection of the Daleks on 15 February 1984. She only very narrowly defeats Clara, who is some four weeks short of three years as a regular character.

Because 1. Narrowly defeating is still defeating, and 2. In what way would Clara's cameo in The Snowmen count as a "regular appearance" to most people? Surely by most proper measurements she became a regular beginning with The Bells of Saint John in March 2013, making her run as a regular two years, seven months and 21 days? -- Tybort (talk page) 21:15, November 29, 2015 (UTC)

What constitutes a companion?[]

For me it is clear... A companion has their own room in the Tardis. Everyone else I would consider an associate regardless of how close or long the association was. I am a long time viewer and fan of the show, but I am certainly no wiki expert here. But I have never considered either the brigadier or Rvier Song a companion. And I do not believe either one had their own room in the Tardis. Martek ☎ 00:27, February 4, 2016 (UTC)

The "behind the scenes" section of this article actually goes into depth on this point. You can find an explanation of the wiki's stance there. The forums are also full of companion debates, if you're interested, but they're not really eye-opening.--Skittles the hog - talk 01:37, February 4, 2016 (UTC)

Presumably Liz Shaw went home each night, after her shift at UNIT. Is she just an "associate"? Where does K9 fit in this? Another "associate"? Kamelion?

If you were a long time viewer, you wouldn't have been thinking about any of them as "companions" in the seventies - the women were "assistants". In the sixties they were mainly thought of as the Doctor's friends, although the word companion was used now and again.165.225.76.56talk to me 13:08, August 23, 2017 (UTC)

I'm starting a discussion edits because I don't want edits to keep being undone and redone.

Per Tardis:Italics, individual episode titles for Hartnell episodes get quotation marks. This is allowed in the citing of stories in the body of an article, but does not work in infoboxes. Shambala108 ☎ 21:12, January 12, 2018 (UTC)

Does Daniel Barton count as a companion of the Master? He traveled in the Master's TARDIS, so I'd assume that at least means he's considered. Never Forget The Day The 456 Arrived ☎ 19:59, March 6, 2020 (UTC)

How Long Was Handles With The Doctor?[]

The name is "Species and Gender" and it is ordered that way, but the subheadings only had "Humans" and "Non-humans", even though that goes against what the heading says and how it's actually laid out. It has a clear point in the text where it goes from talking about female humans to male humans - how does it not make sense to put a subheading there to clearly differentiate between the parts and make it easy to locate each? I changed it to have the subheadings "Female Humans" and "Male Humans" with the edit summary: "Made a subheading distinction between female humans and male humans, as it is ordered that way, and the heading implies there should be. It frankly makes no sense to me that it wouldn't be and I found the lack unnecessary confusing." The person who undid it said: "Unnecessary and actually more confusing." They then said: "The edit is unnecessary and actually more confusing. The section titled "female humans" only refers to "humans", for instance." Although it starts with talking about just humans, it quickly moves on to specifically females, and don't think it actually mentions any males (I could be wrong). It may be worth discussing whether the "Female Humans" subheading should be moved to below the first paragraph. This person obviously feels it would be more confusing to do it the way I have proposed (both "Female Humans" and "Male Humans" subheadings), but I want to hear what other people think. I also wanted to move this discussion to the talk page rather than keep undoing each other's edits. Anonymous2606 ☎ 18:57, August 6, 2020 (UTC)

If you're going to do that, if should probably be formatted like

Since having the neutral human discussion under the female human section is confusing. I also note that it is sort of implicitly biased against transgender companions, which do exist, since gender and sex are not the same (and weirdly the heading says gender even as it uses sex terms), and if we conflate male with man, then instead if a nonbinary companion shows up ever we'll start having issues there. By far a better issue is just to remove the "gender" heading from the section entirely. Najawin ☎ 19:04, August 6, 2020 (UTC)

I was just following how it had already been worded. I agree that there may be issues with the wording and how it's organised, but that's a bigger issue that just the titles as it runs all throughout the text. It might make more sense to say men vs women, but then the entire text would need to be altered. I don't even entirely see why it need be ordered by sex or gender so much, but as it is it makes sense for the headings to reflect that. I agree that it should be changed to sex, just to be more accurate as that is what's being talked about. Anonymous2606 ☎ 19:25, August 6, 2020 (UTC)

Again, the edit you made actually makes things less clear, as we can interpret "species and gender" to just refer to an overall discussion of the two issues, and splitting up on the biggest distinction, that of species, but in further splitting as you did you actually moved some points about general humans into the "female human" section, which makes things worse. There are ways to edit as you're looking for to make things more clear, but what you did is not one of them. Najawin ☎ 19:28, August 6, 2020 (UTC)

Also in reference to the title possibly referring to overall discussion - while it could, it really doesn't seem to as it goes from talking about females to males with a clear distinction. If it was a general discussion I would argue it wouldn't clearly transition from one to the other but talk about both subjects together, perhaps in comparison. Instead, it goes from one distinct topic to the other, without, as far as I could see, even direct reference to each other. Anonymous2606 ☎ 19:49, August 6, 2020 (UTC)

I was also wondering whether maybe the "Female Humans" category should have more about specific companions, like the "Male Humans" and "Non-humans" ones do... Anonymous2606 ☎ 20:02, August 6, 2020 (UTC)

Are images like these still used? It feels a little off to me, but I know other pages also used to use similar images. 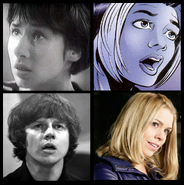 The image in question (also a .png file). 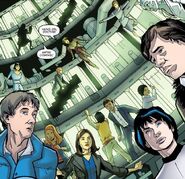 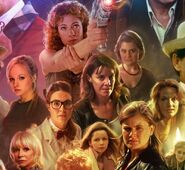 The Legacy of Time

It's true that they've been moved away from over the years. That being said, this one was especially chosen at the conclusion of a discussion, so its continued presence is not against the rules, just a somewhat curious artefact of past Wiki custom. I kinda like it myself, and "companion" is otherwise a rather tricky topic to encapsulate in just one picture. That being said, if someone had a good alternative suggestion for the page image, it's certainly been long enough that it could be considered. Scrooge MacDuck ⊕ 22:02, 1 July 2022 (UTC)

Only thing that comes to mind immediately is this (check gallery) frame from Endgame which sadly lacks non-TV companions (c'mon, Frobisher was just there). Still, so is our current image, and this one also displays several eras of the show (1's era with Ian and Barbara instead of Susan, 5's entire crew, plus 11's crew as well). Other options can also be searched, ofc. OncomingStorm12th ☎ 22:23, 1 July 2022 (UTC)

Ah, and the crossovers keep on giving: The Legacy of Time (although a bit crowded on the corners) provides some nice variety as well: Leela and Romana from 4, Ace from 7, (an older) Jo from 3, originating-from-books Benny from 7, originating-from-audio Charley from 8, and, some might argue, Jenny, River and Osgood. OncomingStorm12th ☎ 22:33, 1 July 2022 (UTC)