Slipback by Eric Saward was the first original Doctor Who serial to be produced for radio[disputed statement]. It was first broadcast by BBC Radio in the summer of 1985 when the televised series was on hiatus for a year. The broadcast formed part of the three-part children's magazine series Pirate Radio Four which featured two ten-minute episodes per edition.

Colin Baker and Nicola Bryant reprised their TV roles for the production, which also included other cast members. It, along with the earlier Doctor Who and the Pescatons, is considered a forerunner of the later Big Finish Productions audio dramas. It was followed nearly a decade later by two more radio dramas starring Jon Pertwee and in 2007 by a new made-for-radio series for BBC7 (produced by Big Finish) starring Paul McGann.

Slipback was released on cassette by BBC Audio, and later on CD by Silva Screen Records.

The Sixth Doctor and Peri share an adventure on board a starship taken over by its dual personality computer, which tries to take the ship back to the dawn of the universe and start life again. Along the way the duo meet a couple of comedy policemen, an art thief and a captain who wants to infect his crew with one of his diseases...

Recovering from a modest hangover, the Doctor hears a voice from his dreams that warns of impending danger for the fabric of time itself. Waking up, the Doctor discovers that illicit time experiments aboard the Vipod Moor, a survey ship taking a census of the galaxy, have pulled the TARDIS out of the vortex. Deciding to investigate further, the Doctor and Peri board the Vipod Moor, but find themselves face-to-face with a raging Maston — a vicious animal that's eating the crew.

Separated in the confusion, Peri wanders around the ship's corridors while the Doctor happens upon the central computer intelligence that controls the ship and learns that a botched maintenance job has split the computer's consciousness into two personalities — a bubbly public persona and a scheming inner voice.

The Doctor quickly escapes the inner chamber and reunites with Peri, then dashes into the TARDIS. Gravely concerned that the Inner Voice could massively disrupt history, the Doctor plans to materialize the TARDIS inside the computer's memory core and disable it. However, a member of the Gallifreyan high council urgently contacts the Doctor and warns him to desist, informing him that the web of time already accounts for the Vipod Moor's journey into the past. He explains that the Inner Voice has miscalculated and arrived at the beginning of everything, exploding upon arrival and triggering the Big Bang.

Realizing he nearly aborted the birth of the Universe, the Doctor pilots the TARDIS away from the Vipod Moor, vowing to find a sizeable library and bone up on his knowledge of history. Meanwhile, the Vipod Moor continues on its fateful journey and the computer's Public Persona decides the Inner Voice's slaughter of the crew was completely unwarranted, activating the ship's self-destruct device, inadvertently insuring the ship will spark the Big Bang — and the rest of the universe — into existence.

No other individuals were actually credited on-air at broadcast. 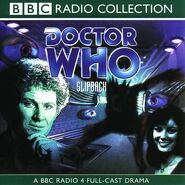 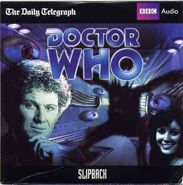 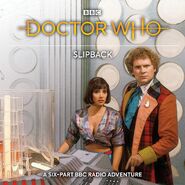 Revised cover with the 2018 Doctor Who logo