Singularity was the seventy-sixth story in Big Finish's monthly range. It was written by James Swallow and featured Peter Davison as the Fifth Doctor and Mark Strickson as Turlough.

It was the third audio story to feature the Fifth Doctor and Vislor Turlough. It was released in November 2005, four years after Strickson had appeared in the audio story Loups-Garoux.

It was the last story to feature only the Doctor and Turlough together until The Memory Bank was released in 2016. However, there were many stories released within the 11 year gap which featured the Doctor travelling with Turlough, Nyssa and Tegan Jovanka.

Russia, the near future.

The Somnus Foundation knows the fate of mankind; they promise a tomorrow where humanity will evolve into a godlike form of infinite power. They will lead us there, to a destiny that spans the stars. This is how the future will unfold.

The Doctor knows the fate of mankind; the human race is destined to fight and struggle for their very existence, to survive disaster and war and carve an empire from an unforgiving universe. He has seen it with his own eyes. This is how the future will unfold.

Beneath the towering headquarters of the Somnus, in the streets of Moscow a dark power is building, and a conspiracy that stretches across eternity is nearing completion.

Time is fracturing and the Doctor and Turlough are at the heart of the chaos. History is about to change and the galaxy will burn in its wake...

Only the broad strokes have been laid down. It's in the moments between the ticks of the clock where life truly thrives, where we can make a difference.The Fifth Doctor [src] 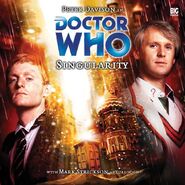 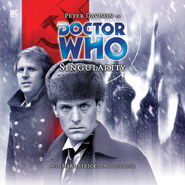