ISBN 978-1-84990-772-9
Silhouette was the fifty-fifth novel in the BBC New Series Adventures series. It was written by Justin Richards and featured the Twelfth Doctor and Clara Oswald.

"Vastra and Strax and Jenny? Oh no, we don't need to bother them. Trust me."

Marlowe Hapworth is found dead in his locked study, killed by an unknown assailant. This is a case for the Great Detective, Madame Vastra.

Rick Bellamy, bare-knuckle boxer, has the life drawn out of him by a figure dressed as an undertaker. This angers Strax the Sontaran.

The Carnival of Curiosities, a collection of bizarre and fascinating sideshows and performers. This is where Jenny Flint looks for answers.

How are these things connected? And what does Orestes Milton, rich industrialist, have to do with it all? This is where the Doctor and Clara come in. The Doctor and his friends find themselves thrust into a world where nothing and no one are what they seem. Can they unravel the truth before the most dangerous weapon ever developed is unleashed on London?

In late Victorian London, Marlowe Hapworth rushes home after visiting the Frost fair and the Carnival of Curiosities to write to Madame Vastra. His manservant Carlisle later finds him dead in his study, having been stabbed in the back by his letter-opener. Elsewhere, Rick Bellamy is reduced to skeletal remains by a mysterious figure after leaving the company of his friend Strax. Neither Hapworth nor Bellamy are the first murder victims of this nature and so the Paternoster Gang set out to investigate.

The Doctor refuses Clara's request to take her to visit King Arthur. Instead the Doctor is more interested in a power spike detected by the TARDIS in Victorian London. They are pointed to the Frost Fair and the Carnival of Curiosities where the Doctor is unimpressed by most of the entertainment on offer. He is intrigued by the Shadowplay, however, as he notes that there are clearly no strings attached to any of the shadow puppets. The puppeteer, a woman named Silhouette, does not reveal her secrets. Outside, the time travellers meet Jenny Flint who is questioning people at the Fair about Hapworth's murder while Vastra investigates the scene of the crime back at Hapworth's home. The Doctor heads off to meet with Vastra while Clara and Jenny speak about what has happened since their last meeting.

Meanwhile the investigations continue as Strax seeks to avenge Bellamy's death. He obtains a list of all of the recent murder victims yet finds no patterns linking them together, apart from that fact that they seem to have been down on their luck. He searches the ally in which Bellamy was killed and meets a strange man dressed as an undertaker but finds no answers. Elsewhere the Doctor meets Vastra as Hapworth's home. They rule out his death being accidental or suicide. They only clues they have are his ticket from the Carnival from the previous day and three origami birds found in his study that have now disappeared.

Back at the Fair, Clara meets a man who she is surprised to find out is named Oswald, as well as his employer, an industrialist named Orestes Milton. The Doctor swiftly reappears and speaks with Milton. Once Milton leaves, the Doctor ushers Clara along to follow him. The Doctor was made more than suspicious by Milton's vocabulary as he used words like "debrief" and "origami" which do not come into English use until the later stages of the Second World War and the 1950s respectively. They follow him to a street and see him leaving a house which they doubt is where he actually lives considering how run-down it is. They enter the house themselves and find some more origami birds by the window. At one point, they disappear. Unbeknownst to the Doctor and Clara, who exit the house and meet with Jenny once more before turning in for the night back at Paternoster Row, the paper birds fly off and return to Silhouette who has met up with Milton. One bird unfolds and on it is written the Doctor and Clara's conversation. Milton becomes worried that the two of them will stumble across something important and sends Silhouette away to talk to Affinity.

The Gang splits up the next morning to further their investigations. Clara meets up with Oswald and asks for directions to one of Milton's factories. Oswald directs her to Alberneath Avenue but is unable to accompany her as he has a class to teach. Clara reaches the empty factory via cab and breaks her way in, only to be attacked by flying origami birds. Strax, his investigations coming up fruitless, is nearby and hears someone screaming for help. Strax burns the paper bird with an incendiary pod and helps patch up Clara's cuts. Strax concludes the birds were drones before they leave to meet back up with the Doctor and Jenny at the Frost Fair. Meanwhile, Milton rests by his holographic fireplace and speaks with Silhouette, who is made uncomfortable by Milton's suggestion of killing the Doctor and his associated before they discover something they shouldn't. Milton thus begins recharging her implant power source to stop her self-will from surfacing.

At the Fair, the Doctor secretly investigates Silhouette's tent and her puppet figures. He hides as a strange man comes in looking for Silhouette. For a moment, it looks to the Doctor as if the man doesn't have a face. When the Doctor leaves the tent and rejoins Jenny, he is spotted by Michael Smith the Strong Man. They sort out any problems of breaking and entering as Clara and Strax appear. Michael tells them he has known Silhouette for years but recently she has changed. He arranges to meet with them later after his show to tell them what he can but the meeting never comes. Silhouette later confronts Michael for giving away some of their secrets and she manipulates the chain tattoo on his chest to crush him. The Doctor and the others find him murdered, forcing them to rely on the Doctor's other informant at the Carnival. They attend the Carnival of Curiosities where Alfie the showman introduced to the audience "the amazing Lizard Woman" and Vastra is revealed on stage. After some time, the Doctor, Clara and Strax head back to Alberneath Avenue while Jenny stays to keep an eye on Vastra. Vastra is allowed private access backstage by Alfie but she received a visit from a man in a dark cloak and mask called Festin. Festin removes his mask, revealing that Vastra isn't the last Silurian after all.

The Doctor, Strax and Clara speak with an elderly man named Anderson at the tavern. He tells them search out Billie Matherson, a cart driver who helped move the equipment from the empty factory on Alberneath Avenue. As they are doing this, Vastra and Festin hold a stakeout before attempting to sneak into Milton's house. Once inside, Vastra is trapped by a force field but Festin refuses to find a way to deactivate it. He takes of his mask and his Silurian features disappear as he becomes a man with no face. Jenny has Jim Stone from the Frost Fair lead her to Milton's house where she finds Vastra. They shut off the force field but as Jenny gives Vastra a hug, Jim reactivates it rendering them both trapped. Once more, his features disappear to reveal a blank face. Milton arrives and as Affinity leaves to assist Empath, Milton explains that both Affinity (originally named Alfie, the showman) and Silhouette were once ordinary workers at the Carnival with great talents, of personality and puppetry respectively. Milton altered their DNA to enhance those talents, turning them into weapons. Vastra and Jenny deduct that they were behind the deaths of Hapworth and Bellamy. 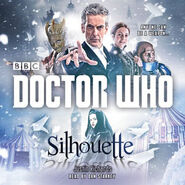