Sick Building was the seventeenth novel released in the BBC New Series Adventures series. It was written by Paul Magrs and featured the Tenth Doctor and Martha Jones.

The characters of Barbara and Toaster introduced in this novel would later become recurring characters in the Iris Wildthyme and Lost on Mars series. Servo-furnishings would put up in various other works by Magrs.

Tiermann's World: a planet covered in wintry woods and roamed by sabre-toothed tigers and other savage beasts. The Doctor is here to warn Professor Tiermann, his wife and their son that a terrible danger is on its way.

The Tiermanns live in luxury, in a fantastic, futuristic, fully-automated Dreamhome, under an impenetrable force shield. But that won't protect them from the Voracious Craw. A gigantic and extremely hungry alien creature is heading remorselessly towards their home. When it gets there everything will be devoured.

Can they get away in time? With the force shield cracking up, and the Dreamhome itself deciding who should or should not leave, things are looking desperate... 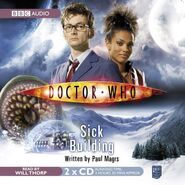