Shining Darkness was the twenty-seventh novel in the BBC New Series Adventures series. It was written by Mark Michalowski and featured the Tenth Doctor and Donna Noble.

For Donna Noble, the Andromeda galaxy is a long, long way from home. But, even two and a half million light years from Earth, some things never change... A visit to an art gallery turns into a race across space to uncover the secret behind a shadowy organisation. From the desert world of Karris to the interplanetary scrapyard of Junk, the Doctor and Donna discover that appearances can be deceptive, that enemies are lurking around every corner - and that the centuries-long peace between humans and machines may be about to come to an end. Because waiting in the wings to bring chaos to the galaxy is the Cult of Shining Darkness.

Crew of the Sword of Justice[]

Members of the Cult of Shining Darkness[] 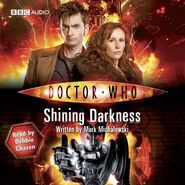